EUR/USD halted its decline, rising today, even though fundamentals were supportive to the dollar. The US economic growth in the third quarter got a positive revision. Janet Yellen sounded rather optimistic during her last testimony as Federal Reserve Chairperson. (Event B on the chart.)
US GDP rose at the annual rate of 3.3% in Q3 2017 according to the preliminary estimate, an upward revision from the advance figure of 3.0%. It was completely within expectations of most market participants. The US economy expanded 3.1% in Q2 2017. (Event A on the chart.)
Pending home sales increased 3.5% in October from September, far exceeding the median forecast of a 1.1% growth. On a negative side, the September reading was revised from no change to a drop by 0.4%. (Event B on the chart.)
Crude oil inventories decreased by 3.4 million barrels last week but remained in the upper half of the average range for this time of year. The drop was bigger than the predicted decline by 2.5 million and the previous week’s decreased by 1.9 million. Meanwhile, total motor gasoline inventories increased by 3.6 million barrels, though stayed at the middle of the average range. (Event C on the chart.) 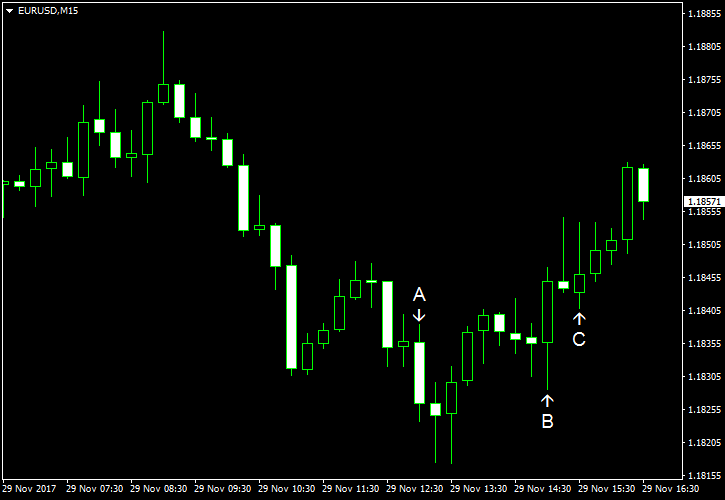