EUR/USD resumed its rally today after ending the session almost flat yesterday. The dollar bounce caused the FOMC policy statement proved to be as monetary tightening from the Federal Reserve is already priced in. Meanwhile, speculations that the European Central Bank will join the tightening trend among central banks were helping the euro. As for US data, it was rather good, but that did not prevent the currency pair from rallying.
Nonfarm productivity fell 0.1% in Q4 2017. That is compared to the predicted increase by 0.8% and the previous quarter’s revised growth of 2.7%. (Event A on the chart.)
Initial jobless claims were at the seasonally adjusted rate of 230k last week, little changed from the previous week’s revised level of 231k. Analysts had predicted an increase to 237k. (Event A on the chart.)
Markit manufacturing PMI rose from 55.1 in December to 55.5 in January according to the final estimate. It was the same as the preliminary figure and the consensus forecast. (Event B on the chart.)
ISM manufacturing PMI slipped to 59.1% in January from 59.3% in December (revised down from 59.7%). Experts had anticipated an even steeper decline to 58.7%. (Event C on the chart.)
Construction spending rose 0.7% in December from November, compared to the predicted gain by 0.4% and the previous month’s increase of 0.6% (revised, 0.8% before the revision). (Event C on the chart.) 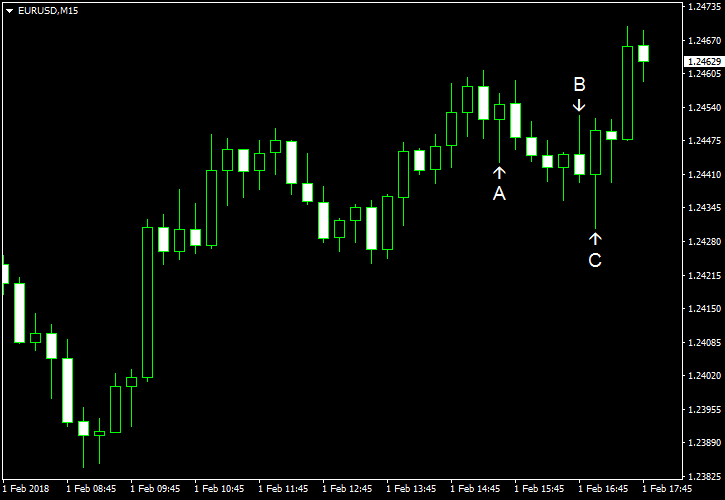