EUR/USD crashed after US CPI beat forecasts but quickly reversed losses and is now trading far above the opening level. Retail sales, meanwhile, missed expectations.
CPI rose 0.5% in January, accelerating from the growth by 0.1% in December and the beating the median forecast of 0.3%. (Event A on the chart.)
Retail sales fell by 0.3% in January, missing the forecast of a 0.2% increase. The December change was revised from an increase by 0.4% to zero growth. (Event A on the chart.)
Business inventories increased by 0.4% in December, the same as in November. Experts had predicted a 0.3% increase. (Event B on the chart.)
US crude oil inventories grew by 1.8 million barrels last week but were in the lower half of the average range for this time of year. That is compared to the average forecast of 2.8 million and the previous week’s increase by 1.9 million. Total motor gasoline inventories jumped by 3.6 million barrels and were in the upper half of the average range. (Event C on the chart.)
On Monday, a report on treasury budget was released showing that a surplus of $23.2 billion in December turned into a deficit of $49.2 billion in January. The average forecast had promised a surplus of $50.2 billion. (Not shown on the chart.) 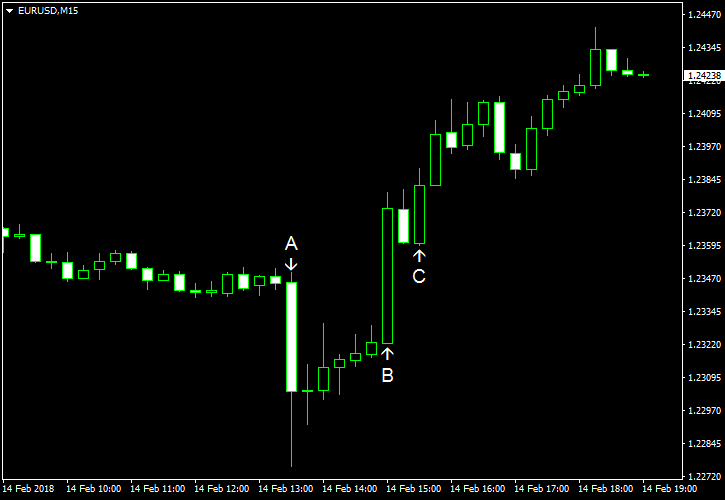