EUR/USD Extends Rally, Finds No Obstacles from Mixed US Data

EUR/USD extended its rally today after reversing losses caused by the US CPI yesterday. Today’s mixed economic reports in the United States gave the currency pair few reasons to stop its upward movement.
PPI rose 0.4% in January, matching expectations, after falling 0.1% in December. (Event A on the chart.)
NY Empire State Index fell from 17.7 to 13.1 in February, while experts had promised it to stay unchanged. (Event A on the chart.)
Philadelphia Fed manufacturing index climbed from 22.2 to 25.8 in February. That was a surprise considering that analysts had predicted a drop to 21.5. (Event A on the chart.)
Initial jobless claims increased from 223k to 230k last week, in line with expectations. (Event A on the chart.)
Both industrial production and capacity utilization fell in January. Industrial production edged down by 0.1%, missing the forecast of a 0.2% increase. The previous month’s increase got a substantial negative revision from 0.9% to 0.4%. Capacity utilization rate slipped from 77.7% (revised down from 77.9%) to 77.5% instead of rising to 78.0% as was predicted by specialists. (Event B on the chart.)
Net treasury purchases were at $27.3 billion in December. That was lower than the median forecast of $50.3 billion and the November value of $57.5 billion. (Event C on the chart.) 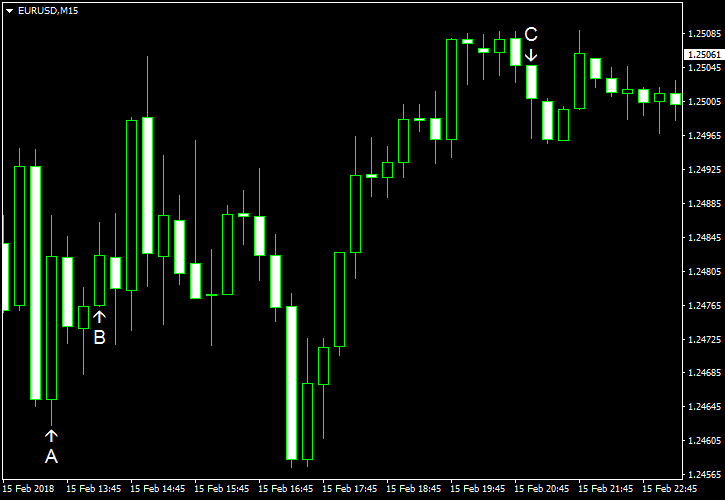