EUR/USD extended yesterday’s decline as markets welcomed the testimony of the new Federal Reserve chief Jerome Powell. The currency pair fell even as today’s macroeconomic data in the United States was not that hot, though the decline was limited and the pair is trying to rebound right now.
US GDP rose by 2.5% in Q4 2017 according to the preliminary (second) estimate, slowing from the growth of 3.2% in Q3. The actual reading was in line with market expectations and a bit lower than the advance (first) estimate of 2.6%. (Event A on the chart.)
Chicago PMI dropped from 65.7 in January to 61.9 in February, far below the predicted figure of 64.2. (Event B on the chart.)
Pending home sales slumped by 4.7% in January to the lowest level in over three years instead of rising by 0.4% as analysts had promised. Moreover, the previous month’s reading was revised from an increase by 0.5% to no change. The report attributed the slump to low supply levels and a sudden increase of mortgage rates. (Event C on the chart.)
Crude oil inventories increased by 3.0 million barrels last week, exceeding the consensus forecast of 2.4 million. The increase followed the previous month’s drop by 1.6 million. Total motor gasoline inventories expanded by 2.5 million barrels. (Event D on the chart.) 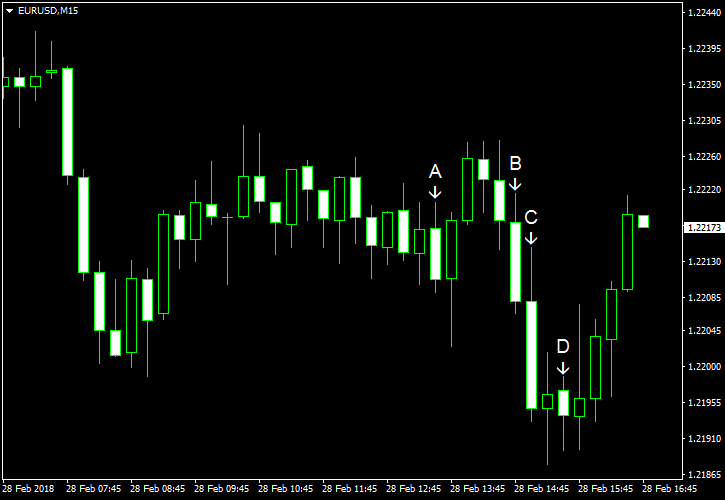