EUR/USD dropped today after the European Central Bank left its monetary policy unchanged and signaled that it is going to keep interest rates low for a long time. (Event A on the chart.) Yet the currency pair bounced after ECB President Mario Draghi downplayed the recent negative macroeconomic reports in his introductory statement before the press conference, saying that the data is “consistent with a solid and broad-based expansion of the euro area economy.” (Event B on the chart.) The EUR/USD pair managed to recover even as all of US economic reports released today beat expectations.
Durable goods orders climbed 2.6% in March following the 3.5% increase in February. Analysts had anticipated a smaller increase by 1.6%. (Event B on the chart.)
Initial jobless claims dropped from 233k to 209k last week. The average forecast was pointing at a much bigger number of 230k. (Event B on the chart.)
Yesterday, a report on US crude oil inventories was released, showing a gain by 2.2 million barrels last week instead of a drop by 1.6 million as analysts had predicted. Still, the stockpiles remained in the lower half of the average range for this time of year. The increase followed the drop by 1.1 million the week before. Total motor gasoline inventories increased by 0.8 million barrels. (Not shown on the chart.) 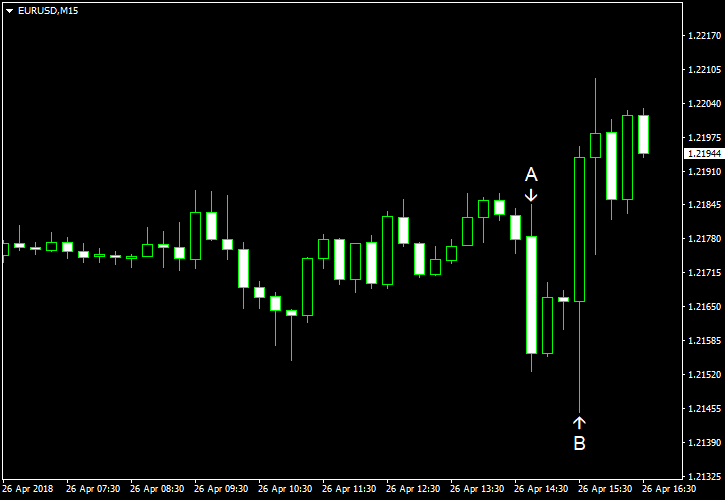