Japanese Yen Steady As BoJ Holds Once More, Kuroda Up Next

The battered Japanese Yen got no respite on Friday after the Bank of Japan left all of its monetary policy settings on hold as had been universally expected.

That leaftthe key short-term policy rate at -0.1%, the 10-year Japanese Government Bond yield target around 0% and massive bond-buying still very much in place.

This was no surprise at all, of course, with the Bank of Japan still publicly committed to keeping the monetary taps wide upon until consumer price inflation hits 2% and stays there. At last look it was running some way below that at 1.1% in March, having retreated from 1.5% in February.

The BoJ now expects it to average 1.3% this year. It also expects inflation to rise back toward its 2% target in due course but declined to say when this might be in Friday’s statement, having previously thought it possible next year. The central bank expects the economy in its charge to continue expanding moderately.

USD/JPY barely moved on the news, and market focus will now turn to BoJ Governor Haruhiko Kuroda who will speak on the decision later. He has been known to throw markets the odd policy curveball but these can by their nature be hard to predict. 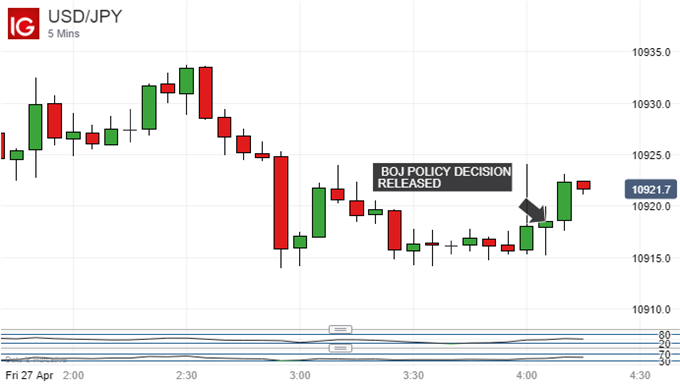 In any case, the market is probably fixed on Friday’s US session, when official growth data are due, and the Federal Reserve’s May monetary policy meeting next week.

The Japanese Yen has come under pressure against the US Dollar in recent days as the contrast between a Federal Reserve still committed to raising interest rates contrasts sharply with a BoJ still stuck very firmly in stimulus mode. US Treasury yields have risen to four-year highs, with the ten-year’s 3% or so again in marked contrast to the Bank of Japan’s repression of the equivalent JGB yield to 0%.

On its daily candlestick chart, USD/JPY has left its former April trading range –marked in red- in the dust. Dollar bulls are pushing it toward a band of resistance around early-February’s highs, which are marked in blue. 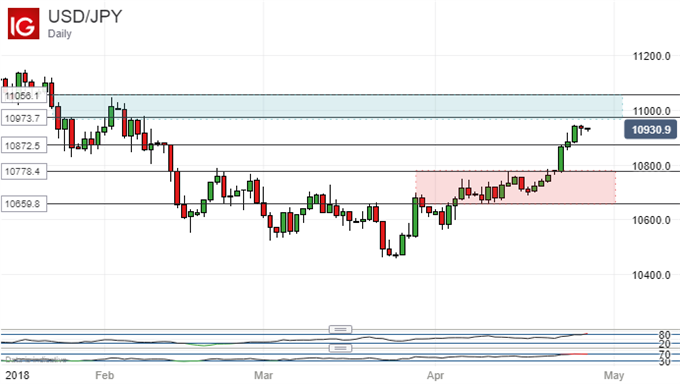 If they can’t get there then support is likely at the old range top, which comes in some way below the market at 107.78.