EUR/USD attempted to rally today as the dollar seemed rather soft due to profit-taking that followed the greenback’s strong performance yesterday. Yet the rally failed, and the currency pair is trading near the opening level right now. Macroeconomic data was not beneficial to the currency pair as eurozone inflation slowed unexpectedly (event A on the chart), while US reports were good for the most part.

Nonfarm productivity rose 0.7% in Q1 2018. That is compared to the median forecast of a 0.9% and no change in the previous three months. (Event B on the chart.)

Initial jobless claims rose a bit from 209k to 211k last week. The increase was far smaller than a rise to 225k predicted by experts. (Event B on the chart.)

Trade balance deficit was at $49.0 billion in March, down from $57.7 billion in February, falling below the $50.0 billion level forecast by analysts.(Event B on the chart.)

Markit services PMI rose slightly to 54.6 in April from 54.0 in March according to the final estimate. The actual value was close to analysts’ forecasts and the flash reading of 54.4. (Event C on the chart.)

Factory orders increased 1.6% in March, at the same rate as in February (revised, 1.2% before the revision). Forecasters had predicted a somewhat slower growth by 1.3%. (Event D on the chart.) 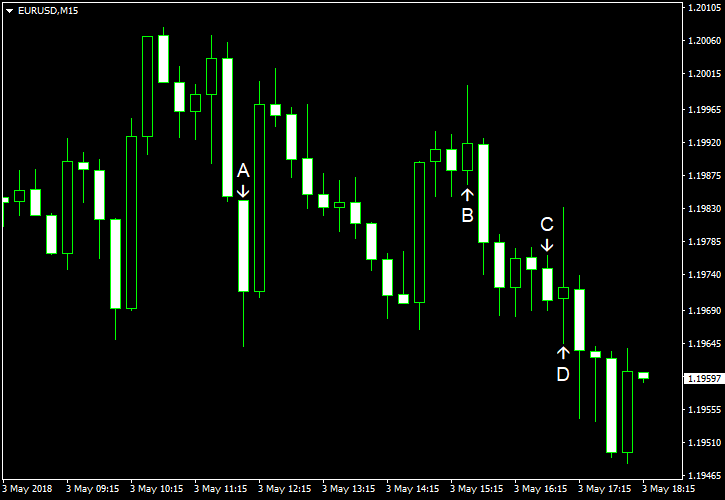