Eurozone final readings for April confirmed that Euro-Area growth has continued to slowdown. The Services PMI fell to 54.7 from the preliminary reading of 55, while the Composite PMI also saw a dip to 55.1 from 55.2. No significant response in the Euro given that these are final readings, however this is another bearish factor that will have to be addressed by the ECB in their next monetary policy meeting (June 14th).

However, the cooling of Euro-Area growth is from elevated levels, which had been noted by IHS Markit stating that the survey remains indicative of the Eurozone economy growing at a robust quarterly rate of approximately 0.5-0.6%. As such, this could be seen as temporary by the ECB who remain confident that Euro-Area growth is broad based and that risks are roughly balance, subsequently the slight easing of growth would unlikely stall the central banks process of withdrawing stimulus.

Benign inflation in the Euro-Area continues to be a headache for the ECB, yesterday’s reading saw the headline rate fall from 1.3% to 1.2%, while the core measure fell to 0.7% (lowest since March 2017). Consequently, this may well prompt the ECB to delay the next policy shift to July from previously touted June, while the current bond buying program will most likely be extended to the end of the year. In turn, given that the ECB prefers a softer currency and with an uptrend in inflation yet to be seen, EURUSD weakness may be set to continue. 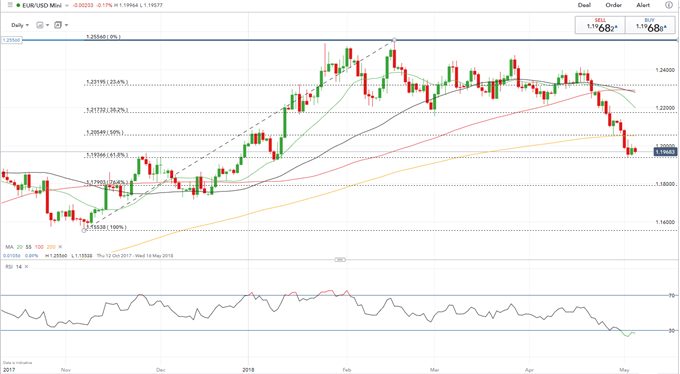