Find out what the #1 mistake that traders make is so that you never have to join them!

Asian stocks managed gains for the most part on Tuesday with the markets looking hopefully to Washington DC where US President Donald Trump is expected to make a decision on a nuclear deal with Iran later in the session.

Crude oil prices had risen earlier this week on worries that more sanctions could be applied, but they slipped back in the Asian session.

The day’s economic data saw Australian retail sales underwhelm. This knocked the Australian Dollar and robust trade news out of China wasn’t enough to put the spring back in its step. The numbers may have been seen as a little historic given that trade talks between the US and China are set to continue in Washington next week, with the threat of tit-for-tat tariffs still glowering.

The Nikkei 225 ended up 0.18% with most other regional bourses including the ASX 200 also in the green. The Kospi inched into the red as its close loomed on Seoul, with the morning session’s gain for tech apparently bringing out the profit takers.

The US Dollar hovered near four-month highs against its major traded rivals, with the Euro still reeling from weak German industrial data on Monday.

EUR/USD remains stick in a marked down channel but falls seem to have found support around the lows of January. Should they give way bulls will need to be on watch for a deeper slide back to the nadirs of December, 2017. 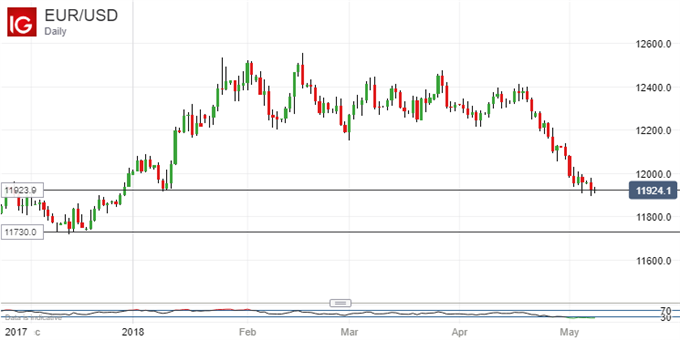 Still to come on Tuesday’s economic data slate are UK house-price data from major lender Haliax, along with Canadian housing-start numbers. However Federal Reserve Chair Jerome Powell is due to speak in Zurich.