The selling in Euro has been evident since the end of April, which has recently posted fresh 2018 lows against the US Dollar (1.1884), dipping below the 1.19 handle. Much of this has largely been due to the recovery in the USD index, alongside the poor run of Eurozone data. The latter has unnerved investors as Euro-Area growth looks to have seemingly levelled off in 2018, most notably in Germany. This has been reflected in the Citi Surprise Index for the Eurozone, which currently hovers around the lowest level since the peak of the Eurozone Sovereign Debt Crisis.

In terms of the USD recovery, recent gains have seen the greenback post fresh 2018 highs, breaking above 93.00 and looks intent on making a run for the December high at 94.22. In doing so, this will likely see EURUSD set up for a move south of 1.18, given that the pair had been trading around 1.1750-1.1790 in December. The latest CTFC data has continued to show a change in sentiment for the currency with Euro longs heading for the exit from the recent record $23.4bln bullish bet. Net long positioning remains crowded at $18.07bln and as such this poses further downside risks for EURUSD, which could lead to greater chance of a further correction in the pair. 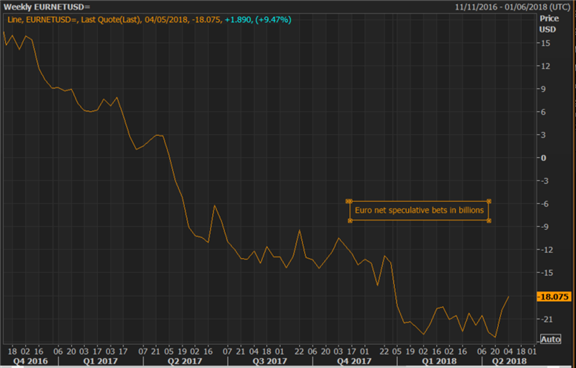 Given that inflation remains stubbornly low in the Euro-Area, this has posed a problem for the ECB who are currently looking at exiting their ultra-loose monetary policy. Alongside this, the recent weakness in economic indicators could potentially prompt a delay in the next policy shift announcement from the ECB (eyes on June/July meeting) with QE likely to be extended until the year-end, while expectations for a rate rise is not seen until mid-2019 at the very least.

In terms of the Federal Reserve, their preferred measure of inflation (PCE), recently hit their 2% price target with the core measure just under at 1.9% (highest since Feb’17). As such, market participants have begun to raise bets (48.4% vs. Prev. 43.9%) that the Fed could raise rates another 3 times this year. Subsequently, the divergence in monetary policy between the Fed and ECB has led to a significant widening on US and German bond spreads, which has also weighed on EURUSD with losses set to resume. 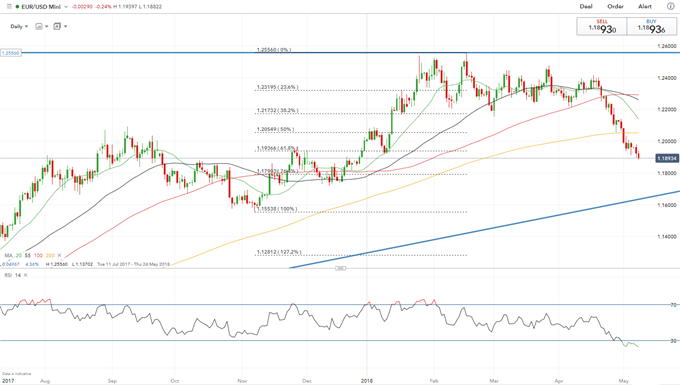