The Australian Dollar depreciated against its major counterparts after worse-than-expected local retail sales data crossed the wires. In March, retail sales neither increased nor decreased coming at 0.0% versus +0.2% estimated and +0.6% in February. Meanwhile, retail sales excluding inflation rose just 0.2% q/q in the first quarter versus +0.6% expected and +0.8% in the fourth quarter of last year.

Local front-end government bond yields declined as the data was released, signaling ebbing hawkish RBA monetary policy expectations. With consumption making up the largest portion of Australia’s GDP, weakening consumer spending can bode ill for growth. This may in-turn cause the central bank to hold off on raising rates if it intends to do so in the near-term.

With that said, the Reserve Bank of Australia has signaled that their next rate move will likely be up. However, at this month’s monetary policy announcement, the central bank reminded us that they are still in no rush to adjust lending rates. Thus, today’s sour economic data probably added to the argument that such remains the case for now.

Looking ahead, at an unspecified time today, China will release April’s trade balance report. Since the country is Australia’s largest trading partner, the results may also fuel Australian Dollar volatility. Following that, US President Donald Trump said that he will make a decision on Iran on Tuesday around 18:00 GMT. If sentiment declines on the outcome, then the Australian Dollar could be vulnerable. 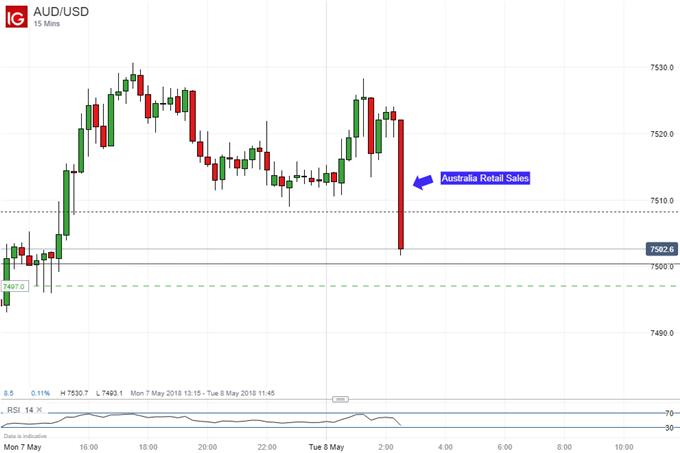 On a daily chart, AUD/USD has been struggling to follow through with pushing below December 2017 lows. Since making that attempt, the pair has rebounded and the former support of the descending channel acted as new resistance. Aussie Dollar seems to be making another attempt to push lower. However, positive RSI divergence shows that momentum to the downside is ebbing and that prices may turn lower in the near-term.

From here, immediate support could be the new 2018 lows set earlier this month. A push below that exposes the 76.4% Fibonacci extension at 0.7436. Meanwhile, immediate resistance seems to be the aforementioned lower line of the descending channel. A climb above it would place the 50% extension at 0.7566 as the next target. 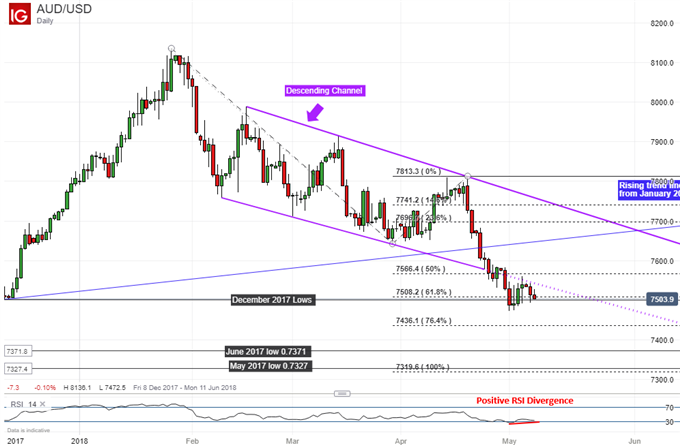