What makes the best traders stand out? Take a look at the DailyFX deep, deep dive into the Traits of Successful Traders

Asian stocks were mostly higher Monday, following US action last week but with one eye still on global trade.

US President Donald Trump said in a Tweet Sunday that he was working with Chinese leader Xi Jinping to try and give Chinese telecoms equipment maker ZTE a way back into business. Washington had imposed a ban on US companies working with the Chinese name because it had shipped equipment to Iran. Trump’s tweet was seen as conciliatory ahead of a second round of trade talks, which looms this week and on which many hopes are pinned..

The Nikkei 225 ended up 0.6% with all major indexes in the green with the exception of the Kospi which was flat. The Hang Seng was a particular leader, rising 1.1% as its close neared.

The US Dollar is still feeling the pressure of last week’s weaker inflation numbers out of the US, with lower US Treasury yields also weighing. Malaysia’s Ringgit fell nearly 1% to a four-month low against the Dollar as local markets reopened following two days of post-election holidays last week. Former Prime Minister Mahathir Mohamad defeated the coalition government in last week’s elections. The local stock market manages gains, however.

EUR/USD has put in a modest bounce but has so far failed to get back above the levels traded in early May. 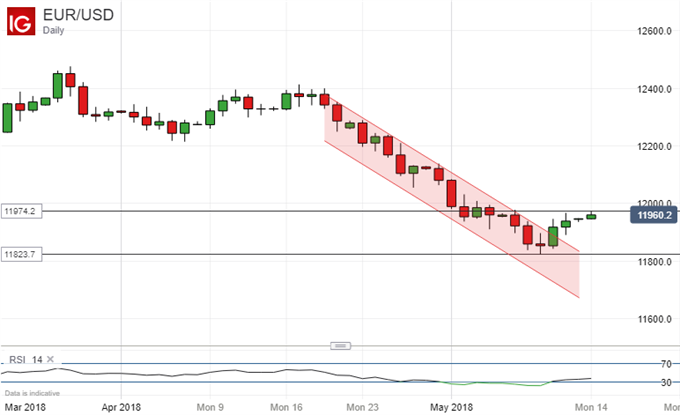 Oil prices slipped on a rise in US drilling rigs and on opposition in Europe and elsewhere to US sanctions against Iran. Gold prices gained, probably thanks to the US Dollar’s slip.

The economic calendar is quite bare for the remainder of Monday. European Central Bank board memebr Sabine Lautenschlager will speak in Copenhagen.