See how retail traders are positioning in GBPUSD as well as other major FX pairs on an intraday basis using the DailyFX speculative positioning data on the sentiment page.

Over the past month GBP has plunged from post-Brexit highs (1.4377) to the mid-1.34s as the BoE deferred from raising rates in May after a raft of soft data, while the recovery in the USD-index also weighed. However, following the recent pounding, long term GBP bulls may find tactical upside at these relatively cheap levels.

Last week, the Bank of England signaled that a rate hike in 2018 remains appropriate, subsequently this has heightened the degree of data dependency for GBP. As such, tomorrows employment report will be key for near-term direction, as is usually the case, focus will be on the wage components, whereby the average earnings ex-bonus is expected to tick up to 2.9% from 2.8%, employment growth is seen at a healthy 130k. A robust employment report with better than expected wage data will begin to reignite expectations for an August rate hike which currently stands at a rather low 40%, subsequently a strong labour report could be supportive for GBP longs. Link to live data coverage of tomorrows UK Employment report, click here

USD Recovery Running Out of Steam

Elsewhere, strength in the US Dollar is losing its momentum given that its rapid rise is running the risk of a near-term pullback. Last week’s CPI disappointment provided the first warning of this as it reigned in expectations for 3 more rate hikes this year, particularly as it follows from the recent FOMC meeting as members signaled that it will not over-react to an inflation overshoot. In turn, the continued easing of the USD gains will likely support GBP in the short, which could be looking to target above 1.3700. 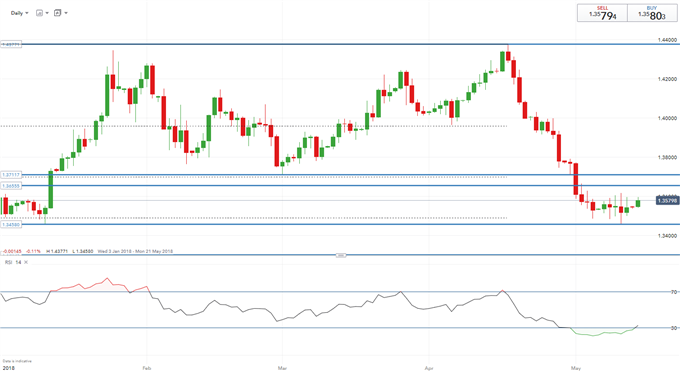 RSI indicator pulls out of oversold territory and suggesting a lift higher is on the horizon.