Meanwhile the Philippine Peso also came under some intense selling pressure after a rather dovish central bank rate hike. In the aftermath, USD/PHP touched highs last seen in late March. The Bangko Sentral ng Pilipinas (BSP) raised rates to 3.25% from 3.00%, but that was widely anticipated as it primed the markets for such an outcome. What seemed to dent the Philippine Peso was that the central bank hinted that further action would not be likely. After all, the markets are forward looking.

Since Malaysia declared a market holiday after the election, all eyes turned to this week’s open to see how the reaction would be. Looking at the chart below, USD/MYR rose more than 0.8 percent at the beginning of this week’s session as the Malaysian Ringgit depreciated across the board. As the markets settle on the outcome of the vote, attention will turn to what the new ruling party means for the economy and the ringgit. 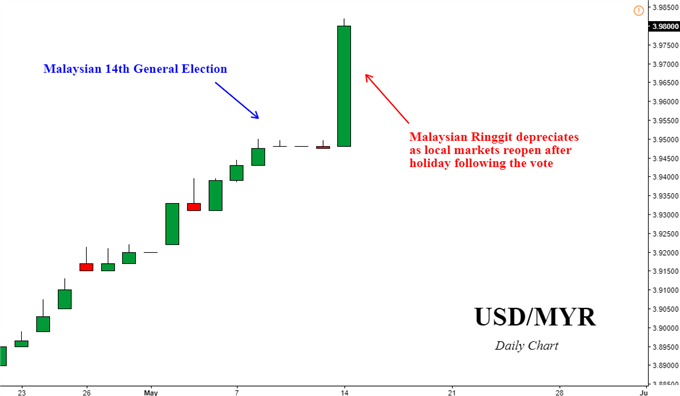 One of the prime minister’s interests is to remove a 6 percent goods and services tax within the first 100 days of office. Such an outcome can potentially bolster inflation in the long-run and cause the central bank to respond by raising rates, thus boosting the Malaysian Ringgit. For now though, the currency could remain under pressure due to some uncertainty as the coalition and its four parties settle on agendas in their government formation.

With such focus on the political side of things, the country’s first quarter GDP report may even pass without much notice for the ringgit. Even though growth is expected to tick down to 5.6% y/y from 5.9%, it will represent the period before the new government.

Bank of Indonesia Rate Decision – It is a Close Call

If you turn your attention to Indonesia, you will find that at an unspecified time on Thursday, the country’s central bank will have their monetary policy announcement. According to Bloomberg, six out of thirteen economists expect rates to rise to 4.50% from 4.25%. The rest opt for a hold. The rise in hike expectations occurred amidst rather hawkish commentary from Bank of Indonesia’s Governor Agus Martowardojo

Last week, he said that “Bank of Indonesia has considerable space to adjust the policy rate” and that “the policy responses will be executed consistently and preemptively to ensure the sustainability of stability”. With that in mind, expect volatile price action from the Indonesian Rupiah around the announcement. Regardless of the outcome, around half of market participants may find themselves on the wrong end of bets. This opens the door for sudden repositioning depending on the result.

On the external side of things, ASEAN bloc currencies like the Singapore Dollar may find some influences from the United States and China. From the former, there will be a steady stream of comments from current and aspiring Fed officials. There, the US Dollar could rise at the expense of its counterparts on diminishing external central bank policy normalization bets. As for the latter, China’s Vice Premier Liu He will visit the world’s largest economy to continue trade negotiations.

On a daily chart, USD/IDR finds itself right on support which is the lower line of an ascending channel from earlier this year. As the pair pushed higher, negative RSI divergence formed signaling that prices may turn lower in the near-term as upside momentums declines.

From here, if the Bank of Indonesia does raises rates, then USD/IDR may face the next support area which seems to be around 13,387.50. This area initially played as resistance but has come back to act as support when the pair was unable to push below it in late April. A break below it will expose 13,737.80.

On the other hand, if prices turn higher then immediate resistance looks to be around 14,138.50. The pair struggled to push above this price level in April and May and could be stubborn to do so once again. A break above it exposes the May 8th high at 14,350.3 before the December 2015 high at 14,408.6. 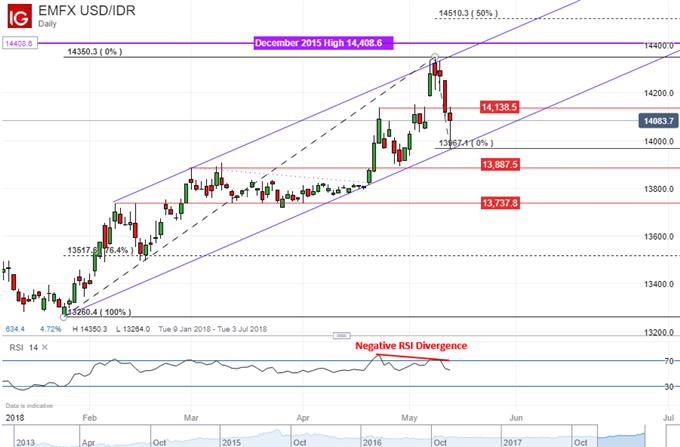 On a weekly chart below, you will notice that negative RSI divergence is actually absent unlike on the daily chart. This could mean that follow-through for a temporary USD/IDR decline could be lacking in the long run. 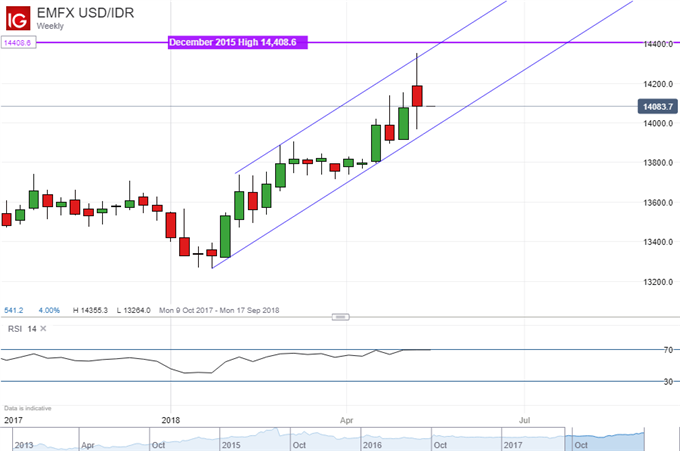