Find out what retail foreign exchange traders make of the currencies you like, and those you loathe, at the DailyFX Sentiment Page

Pyongyang has reportedly expressed its displeasure at joint US/South Korean military exercises, which it says could threaten planned talks with Seoul and even, potentially, Kim Jong Un’s meeting with US President Donald Trump. This news and the persistence of US ten-year yields above 3% combined to take the shine off stocks.

Local data didn’t help, with Japan’s first-quarter Gross Domestic Product contracting, to mark the end of a nine-quarter run of expansion. Clouds are now gathering over both the Abenomics reform programme and the Yen, which seems as far away from tighter domestic monetary policy as ever.

The Nikkei 225 was down 0.3% with stocks in Shanghai and Hong Kong also lower. Australia’s ASX 200 managed modest gains as its close loomed, as did the Kospi.

The US Dollar remained close to five-month highs against major traded rivals as the Federal Reserve now stands head and shoulders above the rest as the central bank most likely to continue raising rates.

USD/JPY has risen once again to the highs of early February which in turn guard the way back to the year’s peaks. 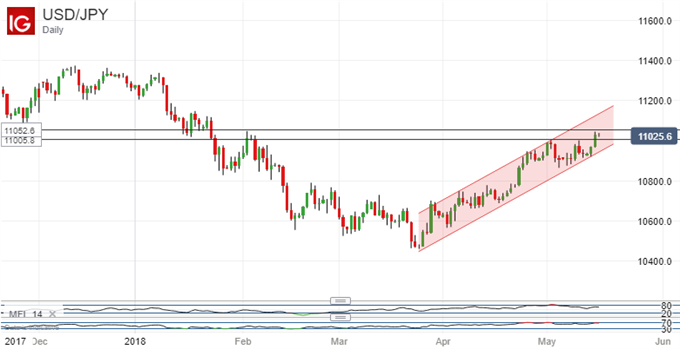 For as long as interest-rate differentials drive this market, it is hard to rule out a return to those peaks for the greenback now.

Gold prices edged up despite a stronger Dollar on what was reported as a little short-covering rally. Oil prices slipped on signs of growing supply despite US sanctions against Iran and ongoing production cuts from traditional producers.

Still to come on Wednesday’s data schedule are consumer price index data from Germany and the Eurozone. US crude oil inventories will be in focus again and European Central Bank President Mario Draghi will speak in Frankfurt.