The Australian Dollar could be in for some volatile price action in the coming days with fundamentals pointing to potential losses while technicals say otherwise. In either instance, the pair may find itself being supported or restrained by near-term options-derived levels. Looking at the table below, AUD/USD one-day implied volatility is the highest of its major peers at 12.24%. The one-week reading is also elevated at 8.08%. Let’s take a look at what may drive prices as the week comes to a close.

Implied Volatility and Market Range for the FX Majors

On Thursday we will get April’s Australia employment report. There, the country is expected to add about 20.0k jobs as the unemployment and labor force participation rates hold steady at 5.5% and 65.5% respectively. Keep in mind that for the majority of this year so far, Australia economic news flow has tended to underperform relative to expectations. Although since mid-April, it has been coming in increasingly less negative.

With that in mind, this opens the door for a slight disappointment in the employment data which could inspire near-term losses in the Australian Dollar. The Reserve Bank of Australia’s May meeting minutes reiterated that they don’t see a strong case for a near-term monetary policy adjustment. The urgency to change rates could be undermined if the data does indeed underperform.

Beyond the jobs report, the Australian unit could be vulnerable to general US Dollar strength and a decline in sentiment. This was the case on Tuesday when there was a pickup in US yields alongside losses on Wall Street. Some of these risks may include ongoing trade talks between the US and China, the Italian majority government formation and speeches from Fed’s Loretta Mester, Robert Kaplan and Lael Brainard on Friday. All of these three policymakers have argued for gradual rate increases.

While the fundamentals seem to point to Australian Dollar weakness, the daily AUD/USD chart shows that prices could turn higher soon. This is because positive RSI divergence is signaling that the pair is running out of downside momentum. While this does not guarantee an imminent reversal, it is worth watching over to see what develops. With that in mind, let’s see where prices may go in the event of one.

From here, immediate resistance is the “day range high” of 0.7522. A push above that exposes the “week range high” at 0.7558. This area is just below the May 11th and 14th highs and a close above them could mean that prices may put in a more lasting correction that reverses the pair’s downside progress since mid-April. 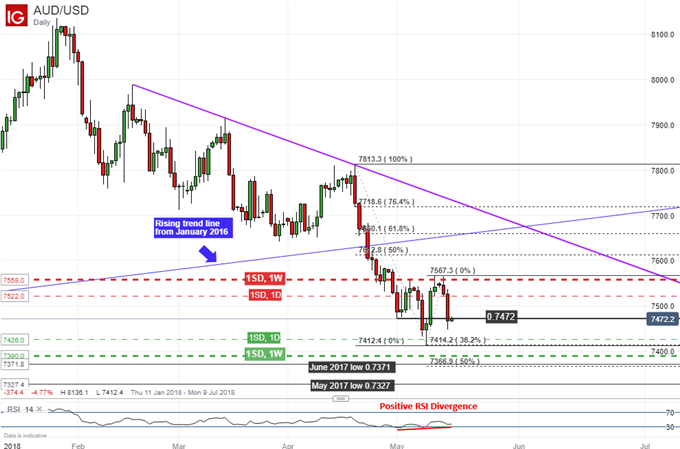