Not sure how these developments impacted the markets? Join a free Q&A webinar and have your trading questions answered!

Asian stock markets were largely mixed on Thursday afternoon with gains seen in Japan while declines left their mark in China. For the former, the Nikkei 225 was up as much as 0.55% and echoed gains seen in Wall Street from Wednesday’s session. There, sentiment improved and the S&P 500 rose on encouraging signs that the world’s largest economy could remain resilient despite tightening credit conditions.

In China though, things weren’t looking too well as the Shanghai Composite and CSI 300 were down 0.23% and 0.37% respectively. This is despite the country trying to make good with Washington ahead of trade talks. The Ministry of Commerce of the People’s Republic of China (MOFCOM) said that the country wants to end tariff concessions on US fruit and pork.

On the currency side of things, the US Dollar continued its selloff from the second half of Wednesday’s session. Unlike the prior session, its decline was accompanied with falling local government bond yields. Meanwhile, sentiment-linked units like the New Zealand and Canadian Dollars advanced at the expense of the greenback.

The Australian Dollar was also higher, but it focused more on the aforementioned trading dynamic rather than a world’s largest economy could remain resilient despite tightening credit conditions. There, Australia added more jobs (22,600 versus 20,000) and all of the gains derived from the full time sector. Meanwhile, the British Pound rose as the UK was reported to tell the EU that it is prepared to stay in the customs union after 2021.

Looking ahead, a lack of top-tier economic data will probably leave risk trends at the forefront of driving trading dynamics. Keep an eye out for ongoing US/China trade negotiations.

For those following the Indonesian Rupiah, at an unspecified time later today the Bank of Indonesia will have its interest rate decision. At this point, out of 33 estimates from Bloomberg, 19 predict that rates will rise to 4.50% from 4.25%. This means that regardless of the outcome, roughly 50% of traders will find themselves having to reposition and this may induce sudden USD/IDR volatility. 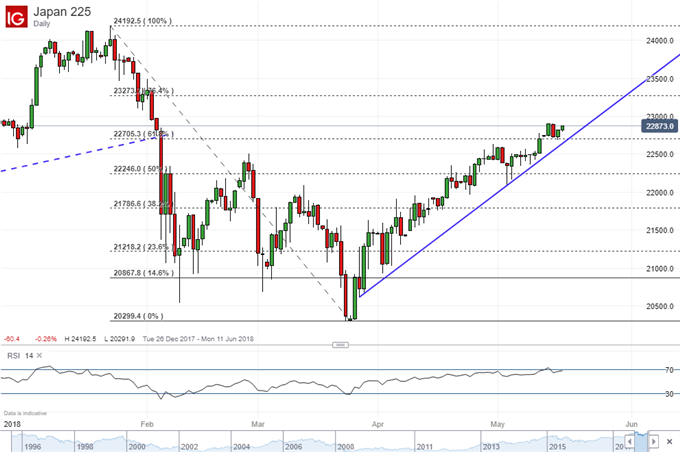 The Nikkei 225 has been consistently pushing higher in an uptrend since bottoming in late March. The Japanese stock benchmark seems to be held up by a rising trend line that dates back to then. In fact, at the moment it stands as near-term support with it being closely aligned with the 61.8% Fibonacci retracement at 22,705. A push below that exposes the 50% midpoint of the retracement at 22,246.