Just getting started trading the Indonesian Rupiah? See our beginners’ guide for FX traders to learn how you can apply this in your strategy!

The Indonesian Rupiah depreciated last week against the US Dollar despite a rate hike to 4.50% from 4.25% by the central bank. Last Thursday, the Bank of Indonesia raised rates for the first time since 2014 and it also pledged to take “stronger measures” to maintain price stability. In addition, Governor Agus Martowardojo said that they will adjust rates if the situation forces them to do so again.

It appears as though Bank of Indonesia’s approach was not satisfactory enough for the markets. The Rupiah has lost ground against its US counterpart as USD/IDR rose to a 31-month high by the end of last week. In addition, the central bank has been burning through foreign reserves which fell to their lowest point since June 2017 in April. It also didn’t help that the US Dollar continued rising last week along with hawkish Fed monetary policy expectations.

An appreciation in the greenback that is accompanied with rising Fed rate hike expectations presents a risk for ASEAN bloc currencies like the Singapore Dollar, Philippine Peso and Malaysian Ringgit. If a central bank (Bank of Indonesia) is unable to keep its currency up despite promising higher rates of return for investors, then just how much of an impact can local economic data can have on a currency?

For example, last week we had Malaysian GDP which missed expectations and failed to offer a meaningful reaction in USD/MYR. There, growth clocked in at 5.4% y/y in the first quarter versus 5.6% expected and 5.9% in the fourth quarter of 2017. Granted, the country is going through a political regime change and the Ringgit spent most of last week consolidating against USD.

With that in mind, Malaysian CPI this week (which is due on Wednesday) may not offer follow through for USD/MYR as Bank of Negara continues monitoring the aftermath of the general election result. Inflation is anticipated rise to 1.6% y/y in April from 1.3% prior. Meanwhile Singapore CPI and inflation, which could generate short-term USD/SGD volatility, may result in much of the same.

Arguably then the focus for ASEAN bloc currencies in the long run is how they continue handling prospects of higher rates from the world’s largest economy. This week offers the FOMC meeting minutes on Wednesday and a speech from Chair Jerome Powell himself on Friday. In addition to other policy voters as well, their commentary may continue stoking rate hike expectations which stands to benefit the greenback at the expense of its monetary counterparts as well as non-interest bearing assets like gold.

Finally, a second prominent risk for PHP, IDR, SGD and MYR is how sentiment plays out this week. Risk trends were already on the rise at the beginning of this week as US Treasury Secretary Steven Mnuchin announced that the US is putting Chinese tariffs on hold. Ongoing positive developments on trade talks between the two largest economies could bode well for the aforementioned currencies. But it could be a push and pull battle between that and a rising US Dollar.

On a daily chart, USD/SGD appears to be struggling to make further progress to the upside after breaking above a descending resistance line just about one month ago. The pair appears to have formed resistance around 1.3469 and has now tested it twice. Simultaneously, the presence of negative RSI divergence warns that prices may soon turn lower as upside momentum ebbs. 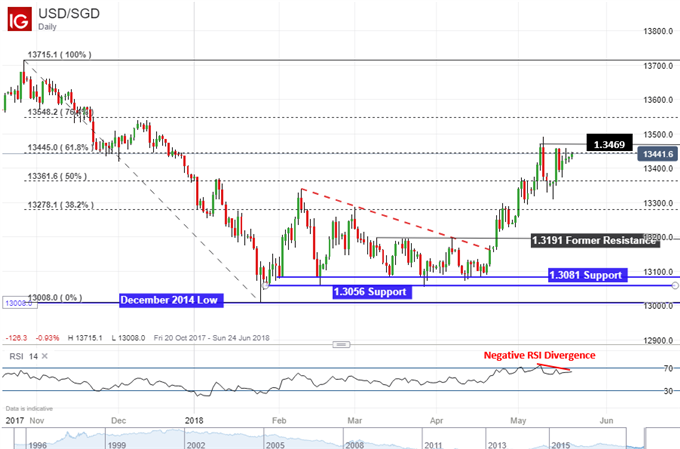