EUR/USD was falling during the Wednesday’s trading session. While the currency pair attempted to rebound after policy minutes released by the Federal Open Market Committee, it did not go far. Market analysts considered the minutes actually supportive to the dollar, basically confirming a June interest rate hike.

Flash Markit manufacturing PMI was at 56.6 in May, little changed from 56.5 in April and matching forecasts. Flash Markit services PMI climbed to 54.6 to 55.7, exceeding analysts’ projections of 54.9. (Event A on the chart.)

New home sales were at the seasonally adjusted rate of 662k in April, failing to meet market expectations of 680k. Furthermore, the previous month’s reading was revised from 694k down to 672k (Event B on the chart.)

US crude oil inventories climbed by 5.8 million barrels last week after falling 1.4 million the week before. That was a complete surprise to forecasters as they were expecting a drop by 2.5 million. Still, the reserves remained in the lower half of the average range for this time of year. Total motor gasoline inventories rose by 1.9 million barrels and were in the upper half of the average range. (Event C on the chart.)

FOMC released minutes of its May meeting today. (Event D on the chart.) In them, the Committee said:

Most participants judged that if incoming information broadly confirmed their current economic outlook, it would likely soon be appropriate for the Committee to take another step in removing policy accommodation.

Yesterday, a report on Richmond Fed manufacturing index was released, showing a jump from -3 in April to 16 in May. Experts had predicted a modest increase to 9. (Not show on the chart.) 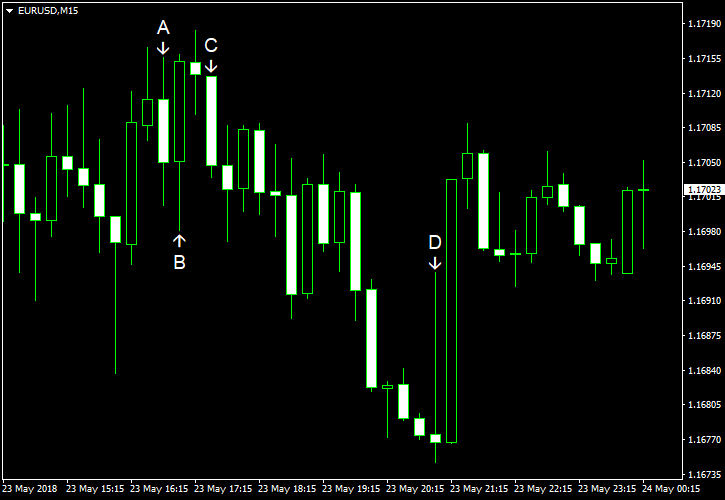