The US Dollar, while concluded Wednesday’s session cautiously higher, pulled back some of its gains as the FOMC meeting minutes crossed the wires. Heading into the release of the document, the markets were already widely anticipating a rate hike at the Fed’s next monetary policy announcement in June. In fact, this month’s interest rate decision prepped the markets for it as the central bank upgraded its views on inflation.

This in turn made officials’ expectations on prices arguably the most important aspect of the statement as the markets gauge the likelihood of additional tightening thereafter. On this front, policymakers noted that it was ‘premature’ to conclude that inflation would remain at levels around 2 percent. In addition, members noted that a modest inflation overshoot ‘could be helpful’.

US government bond yields from all ends of the maturity date spectrum declined signaling ebbing hawkish Fed rate hike expectations. Stocks on the other hand climbed with the S&P 500 closing about 0.32% higher. It seems that the comments indicated that Federal Reserve officials are perhaps in no rush to tighten more quickly. But do keep in mind that in the US, higher rates are still very much likely on the way this year.

It is also important to note that the Fed is closely monitoring the current global trading environment. The minutes showed that in regards to trade policies, a number of participants viewed the range of possible outcomes for economic activity and inflation to be particularly wide. They noted that uncertainty surrounding trade issues could damp business sentiment and spending.

Speaking of that, as the markets transitioned into Thursday’s session, US President Donald Trump was considering weighing Section 232 to consider tariffs of up to 25% on auto imports. The justification for it was via national security grounds. That is the same reason and process used for the steel and aluminum tariffs.

A Look Ahead – JPY May Fall, AUD & NZD Could Rise

If Asian stocks echo the gains seen on Wall Street amidst the FOMC meeting minutes, then we could see the anti-risk Japanese Yen fall behind. Simultaneously, sentiment-linked currencies like the Australian and New Zealand Dollars could benefit. However, keep an eye on how Japanese and Korean auto stocks behave amidst the news from the White House. If losses in Honda, Toyota or Hyundai (affordable carmakers) weigh on benchmark indexes, then we could see an opposite reaction from the currencies mentioned before.

The British Pound depreciated against its major counterparts after worse-than-expected local inflation data dented Bank of England rate hike bets. Meanwhile, weak PMI surveys from the Eurozone and Germany put selling pressure on the Euro. The Japanese Yen was arguably the best performing major on Wednesday, boosted by declines in Asian shares on new trade worries. 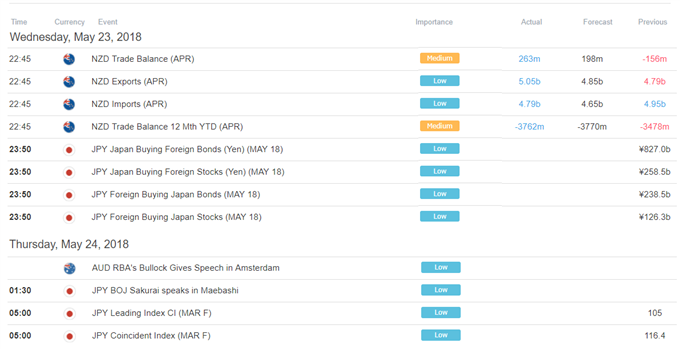 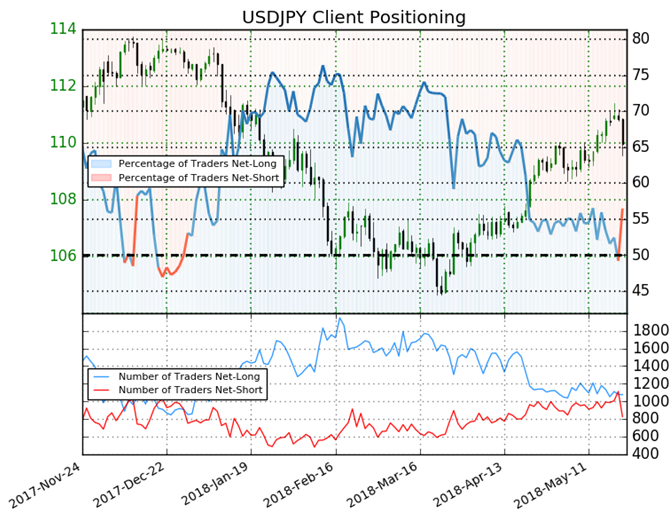 We typically take a contrarian view to crowd sentiment, and the fact traders are net-long suggests USD/JPY prices may continue to fall. Traders are further net-long than yesterday and last week, and the combination of current sentiment and recent changes gives us a stronger USD/JPY-bearish contrarian trading bias.