– The UK economy barely expanded in the first quarter of 2018.

– US dollar strength weighing on GBPUSD.

The second look at UK Q1 GDP confirmed preliminary readings that the economy grew by a miserly 0.1% in the first quarter as manufacturing and consumer-facing services faltered.

According to ONS Head of GDP Rob Kent-Smith:“Overall, the economy performed poorly in the first quarter with manufacturing growth slowing and weak consumer-facing services. Oil and gas bounced back strongly, however, following the shutdown of the Forties pipeline at the end of last year”. He added “while there was some evidence of the poor weather hitting construction and high street shopping, this was offset to an extent by increased energy supply and online sales.”

GBPUSD is trying to move higher after hitting a five-month low around 1.3300 on Wednesday but the US dollar remains firm, despite US Treasury yields dipping over the last week. The US Treasury auctioned $99 billion of two-, five- and seven-year bonds this week and the market may well have forced up yields in the last two- to three-week to get cheaper paper. 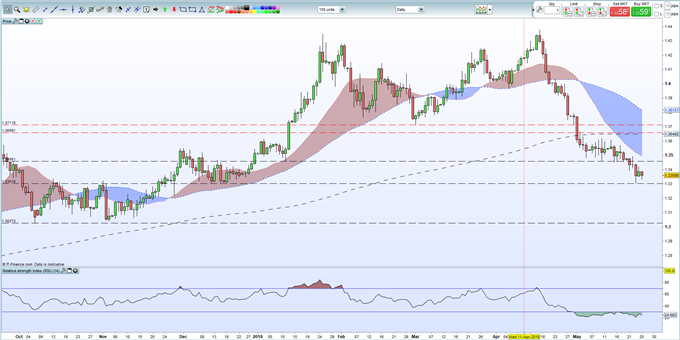 Traders may also be interested in two of our trading guides – Traits of Successful Traders and Top Trading Lessons – while technical analysts may be interested in our latest Elliott Wave Guide.