IDR Set for a Comeback. USD/PHP About to Fall? – ASEAN Weekly

Just getting started trading the Indonesian Rupiah? See our beginners’ guide for FX traders to learn how you can apply this in your strategy!

Amidst another positive week for the US Dollar, which continued to put pressure on currencies like the Philippine Peso and Malaysian Ringgit, the Indonesian Rupiah held its ground and even appreciated against the greenback. Initially, IDR failed to gain much traction when the Bank of Indonesia raised rates for the first time since 2014. Since then, the markets have become more convinced of monetary policy tightening that is to come.

Last Thursday, Bank of Indonesia’s newly appointed Governor Perry Warjiyo took his first day on the job very seriously. He said that the central bank estimates four rate hikes this year and that they will use monetary policy as a tool to stem a selloff in their currency. On Friday, Governor Perry Warjiyo fretted that the Rupiah exchange rate is weaker than the fundamentals.

This now brings us to what next week can have in store and more gains for the IDR could be upon us. On May 30th, Bank of Indonesia’s Board will hold an additional meeting where rates are anticipated to increase again. Such an outcome would mean another hike in less than 2 weeks. If the central bank also continues reiterating commitment to maintain exchange rate stability, then we could see USD/IDR fall and set the stage of a lasting reversal of its uptrend since January.

Then, on Friday we will also get a local inflation report. We shall see if the Rupiah’s depreciation since the beginning of this year translates into overall rising prices. If that does happen, than perhaps that could increase the urgency for the central bank to take more anti-inflationary measures. This would in turn further boost the Indonesian Rupiah.

If you are following the Philippine Peso, than keep an eye out if the central bank it continues to cut reserve requirements. Last week, Bangko Sentral ng Pilipinas lowered this ratio by one percentage point to 18% and hinted that more are on their way. When a central bank reduces the amount of reserves banks are forced to keep, it acts as another form of stimulus. This is because banks can as a result lend out a higher portion of their deposits and thus, potentially boost inflation.

On this front, higher prices have already caused the Philippine central bank to raise rates earlier this month. However, it was seen as a ‘dovish hike’ because the bank downplayed the possibility of more rate increases. With that in mind, there may be some longer-term implications here for PHP if higher inflation ensues as reserve requirement ratios decline.

Similar to what we saw last week, ASEAN bloc currencies may also turn to developments that impact the US Dollar. In fact, there may even be some gains to be had against the greenback next. This is because since late April, US economic data has been tending to increasingly underperform relative to economists’ expectations. This week, on Thursday we will get the Fed’s preferred measure of inflation and on Friday a US jobs report. If more of the same performance in data lowers Fed rate hike bets and the US Dollar, than currencies like the Singapore Dollar and Malaysian Ringgit could appreciate against it.

Last but not least, risk trends are also worth watching. Over the weekend, revived hopes about a US-North Korea Summit improved sentiment. However, this came just days after it was thought to have been cancelled. If the planned meeting between US President Donald Trump and North Korea’s Leader Kim Jong Un is once again placed back into jeopardy and thus unnerving markets, then expect weakness in riskier currencies such as the Philippine Peso or Indonesian Rupiah. In addition, risk trends could also be soured on more hints that the US will eventually go ahead with imposing auto import tariffs. We may get more clarity on this when US Commerce Secretary Wilbur Ross meets at an informal WTO meeting on May 30th.

On a daily chart, USD/PHP is showing signs that its recent push above descending resistance (blue line on chart below) could be in vein. Negative RSI divergence has appeared and it warns that momentum to the upside is ebbing which opens the door for a decline.

From here, immediate resistance is 52.93 which is a combination of the May 15th and 25th highs. A push above that exposes the 50% midpoint of the Fibonacci extension at 53.11. On the other hand, if USD/PHP does indeed turn lower, than former descending resistance may act as new support. A fall below that exposes the May 17th and 22nd lows around 52.32 which is also closely aligned with the 23.6% level. 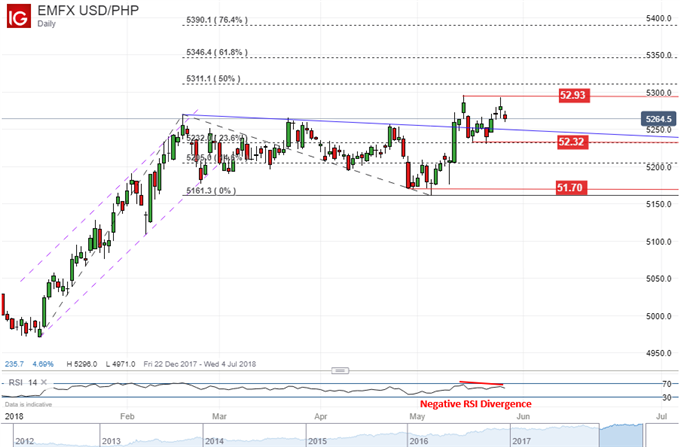