US AM Digest: JPY and CHF Rise on Italian Political Woes

JPY, CHF: Flight to safety out of Italy has been the dominant factor this morning, which prompted a surge of buying in the Japanese Yen and Swiss Franc, while global bond yields have seen a sizeable sell off. A significant widening in German-Italian bonds spreads pushed EURJPY towards the lowest level since June 2017, eying 125, however strong support at the figure has led to some slight moderation in selling. EURCHF also briefly gave up the 1.15 handle, reaching lows of 1.1448.

EUR: Uncertainty surrounding Italian politics remain high, which will be the case for some time as Italy heads towards another election. This came after reports that the President would not approve a Eurosceptic (Savona) as the country’s finance/economy minister, while also designating Cottarelli (ex-IMF official) as PM after Conte gave up on efforts to form a government. A list of ministers is expected to be unveiled today by Cottarelli whereby it is likely that both the League and 5 Star will reject, making a snap election seemingly inevitable. Euro seeing loss of 0.5% today with 1.15 holding for now. Other interest for the Euro will be Friday’s No Confidence vote for PM Rajoy.

USD: The risk off environment has prompted the greenback to show characteristics of a safe haven currency with EUR and GBP selling leading to demand for the US Dollar. A brief move above 95 for the DXY, resistance ahead at 95.15, which marks the highs seen in October.

GBP: The broader risk tone and the rally in the US Dollar has pressured GBP, trading in the mid-1.32s having come off lows of 1.3205. GBPJPY found buying interest above 1.43 to curb further losses.

CAD: The bears are out for CAD ahead of the Bank of Canada meeting, with USDCAD edging towards resistance at 1.3040-50. Unlikely that the BoC will hike tomorrow with a probability of 17.15% for a 25bps hike. Potential for caution from the BoC given that a potential NAFTA agreement looks to be delayed, providing further uncertainty for the Canadian economy. Elsewhere, the recent pull back in oil prices have also kept the Loonie pressured. 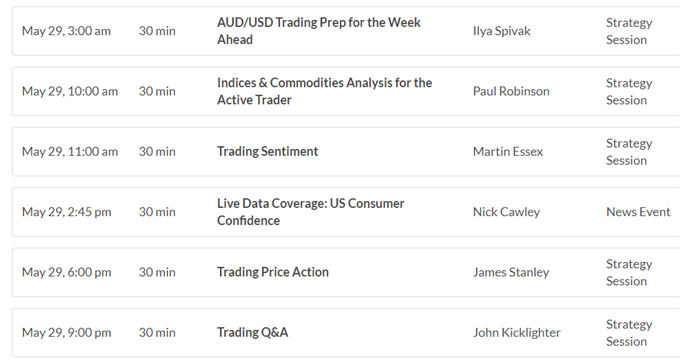 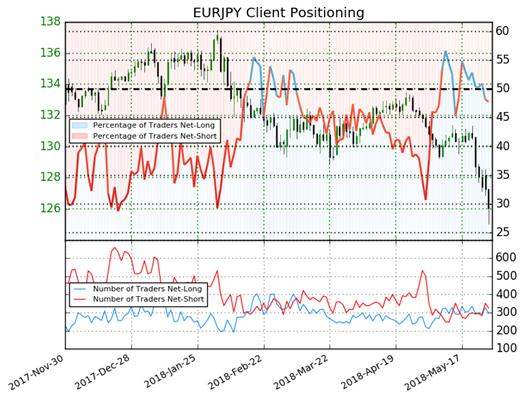 We typically take a contrarian view to crowd sentiment, and the fact traders are net-short suggests EURJPY prices may continue to rise. Traders are further net-short than yesterday and last week, and the combination of current sentiment and recent changes gives us a stronger EURJPY-bullish contrarian trading bias.

The DailyFX US AM Digest is published every day before the US cash equity open – you can signup here to receive this report in your inbox every day.

The DailyFX Asia AM Digest is published every day before the Tokyo cash equity open – you can SIGNUP HERE to receive that report in your inbox every day.

If you’re interested in receiving both reports each day, you can SIGNUP HERE.