Find out what retail traders’ equities buy and sell decisions say about the coming price trend!

At a glance, Asian shares were down by Wednesday afternoon trade as expected, echoing fears around Italy’s political environment. The country is heading for a new election that may become a referendum on its status in the European Union. However, most of the damage was done at market open when stocks gapped lower as they came online. If you take a closer look, shares were consolidating in the aftermath. This could have been due to a lack of updates on Italy this session so far which gave the markets some breathing room.

In Japan, the Nikkei 225 was down as much as 1.44 percent and was on its way to close at its lowest in six weeks. China’s Shanghai Composite Index fell by 1.77% and headed for its lowest close in almost one year. The KOSPI declined about 1.68% and was on its way to finish at a March low. In Australia, the ASX 200 dropped more than 0.5% and appeared to be heading for a pronounced reversal as anticipated.

A similar scenario was present in the FX spectrum. The anti-risk Japanese Yen started off this session sharply higher but pulled back some of its gains as the session dragged on. Meanwhile, the sentiment-linked Australian and New Zealand Dollars were also down before taking back some of their losses. Meanwhile, the Indonesian Rupiah awaited a delayed central bank rate decision where markets are anticipating a second hike in two weeks.

Ahead, there are a handful of economic events to watch out for in addition to updates from Italy. The Canadian Dollar is bracing for intense volatility as it faces a BOC rate decision where recent developments could send USD/CAD higher. The Euro awaits German preliminary CPI estimates for May. Data out of the Eurozone aggregate has been tending to underperform relative to economists’ expectations this year so far. More of the same could send EUR/USD lower if softer German inflation, in addition to the uncertainty surrounding Italy, cause the ECB to rethink about cutting off its QE programme in September.

On a daily chart, the Nikkei 225 closed below recent previous lows as it consolidated around the 23.6% Fibonacci retracement level at 22,397. The index has now resumed its decent as it falls further away from a rising trend line that dates back to late-March. However, the Nikkei 225 is sitting right on top of the 38.2% level at 21,995. A break below that exposes the 50% midpoint at 21,670. 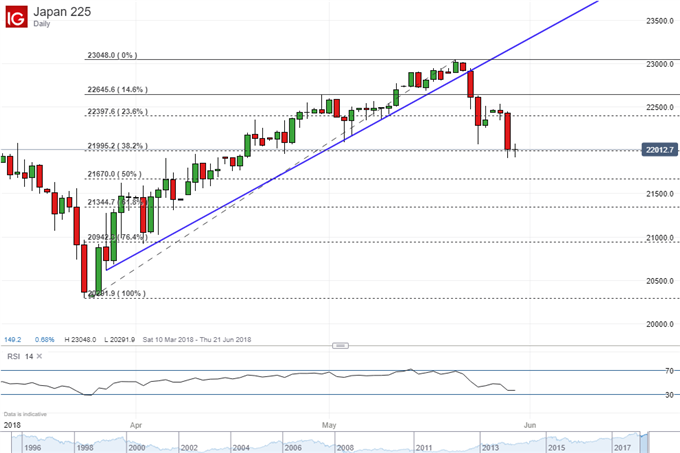 Nikkei 225 and other Equities Trading Resources: