The Australian Dollar underperformed during the early Thursday Asian trading session, and AUD/USD could be heading for a continuation of its dominant downtrend since January. The sentiment-linked currency was held down by a poor performance in Asian shares which fell after gapping higher as Italian political fears abated. This may have been due to escalating trade war fears as reports crossed the wires that the US will enforce metal tariffs on the EU.

Then, Chinese and local data added fuel to the Aussie’s depreciation. Starting with the former, Chinese Manufacturing PMI actually beat estimates coming in at 51.9 in May versus 51.4 expected. Normally this would be Aussie positive since China is Australia’s largest trading partner and economic performance in the former tends to have knock on effects on the latter. However, China’s Steel Industry PMIs fell to 50.6 from 51.7. Keep in mind that a reading above 50 shows expansion in the sector and vice versa.

Perhaps the effect of US metal tariffs are taking its toll on China’s steel industry, and this could bode ill for Australia. This is because Australia’s top exports are crude materials such as iron ore. If China’s metal output is slowing and demand for Australian input materials ebb as a result, then these could dent growth in both nations.

Then, just half an hour later, worse-than-expected Australian Capex data crossed the wires. Private capital expenditures rose only 0.4% in the first quarter versus 1.0% estimated and 0.2% from the fourth quarter of last year. While this and the Chinese data could be seen as anti-inflationary for the RBA’s case, Australia’s central bank has shown us time and time again that rates are going nowhere any time soon. If you look at local government bond yields, they actually remained relatively restrained on both pieces of data.

With that in mind, the focus for the sentiment-linked Australian Dollar will arguably continue to be risk trends. If European shares echo the declines in Asian ones on the EU metal tariffs, then the Aussie may have more room to depreciate. In addition, if later today the Fed’s preferred measure of inflation (PCE Core) beats expectations, then the US Dollar could rise at the expense of its Australian counterpart. With that in mind, the technicals do hint that Aussie losses could be ahead. 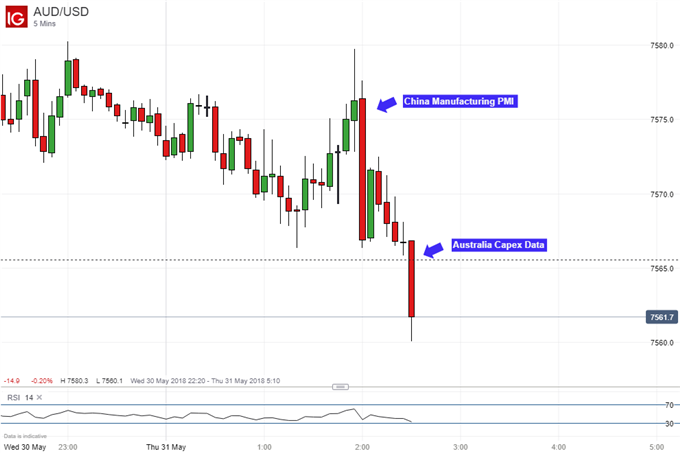 On a daily chart, AUD/USD has been struggling to push lower in tis downtrend since January after hitting a low earlier this month. The pair has cautiously edged higher and has formed a near-term rising line which is acting as support (solid blue line on the chart below). However, there is a warning sign that signals that the upside push may not translate into a bottom. Negative RSI divergence is present and shows that momentum to the upside is ebbing.

From here, taming the pair is resistance at 0.7591 which consists of the highs made towards the end of May. A push above exposes 0.7648 (lows in late March, early April) followed by a falling line from February. This area is also closely aligned with a more long-term trend line from January 2016 and could act as former support now resistance. If AUD/USD turns back lower, a push below immediate support exposes the 23.6% Fibonacci extension at 0.7507 followed by the minor level at 0.7470. 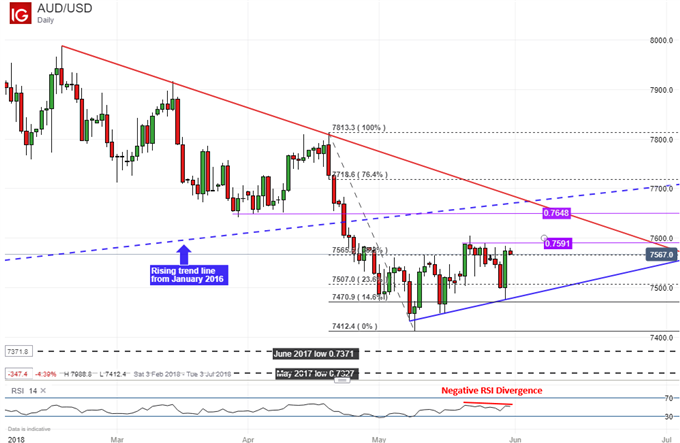