EUR/USD was rather volatile today, attempting to rally intraday but trading near opening level now, as traders were digesting news about political turmoil in Europe and reports that the United States will implement the postponed tariffs on goods from its closest allies as the exemption from the duties will expire tonight. Most US macroeconomic reports released over the trading session were good, with the exception of pending home sales.

Personal income and spending continued to increase in April. Income rose 0.3%, matching expectations and accelerating from the March’s negatively revised rate of growth 0.2%. Spending climbed 0.6% compared to the predicted growth by 0.4% and the March’s positively revised increase by 0.5%. Core PCE inflation remained at 0.2%, while analysts had predicted a slowdown to 0.1%. (Event A on the chart.)

Initial jobless claims dropped from 234k to 221k last week, below the forecast level of 228k. (Event A on the chart.)

Pending home sales dived 1.3% in April from the previous month instead of rising by 0.4% as analysts had predicted. The March increase got a positive revision from 0.4% to 0.6%. (Event C on the chart.) 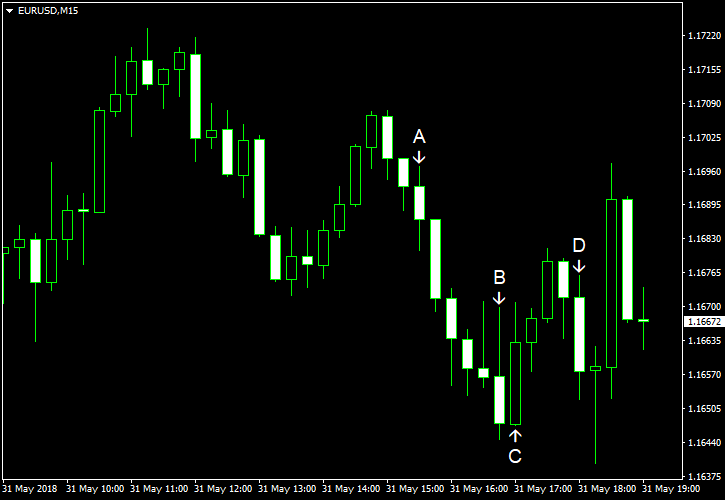