EUR/USD rallied today even though trade wars between the United States and their trading partners have started. Yet macroeconomic data in the United States overshadowed other news. Almost all indicators released today were very solid. The employment report drew the most attention from traders as basically all of its components were better than expected.
Nonfarm payrolls rose by 223k in May, demonstrating a much faster rate of increase than 189k predicted by analysts and 159k registered in the previous month. Unemployment rate unexpectedly edged down from 3.9% to 3.8%. Average hourly earnings rose by 0.3%, also exceeding the forecast of 0.2% and the April increase of 0.1%. (Event A on the chart.)
Markit manufacturing PMI was at 56.4 in May according to the revised estimate, almost unchanged from April’s 56.5. Analysts had expected the same 56.6 reading that was shown in the preliminary estimate. (Event B on the chart.)
ISM manufacturing PMI climbed from 57.3% in April to 58.7% in May, exceeding the average forecast of 58.3%. (Event C on the chart.)
Construction spending jumped 1.8% in April from March after falling 1.7% in the previous month. And again, the actual reading was better than forecasts as experts had predicted an increase by just 0.8%. (Event C on the chart.) 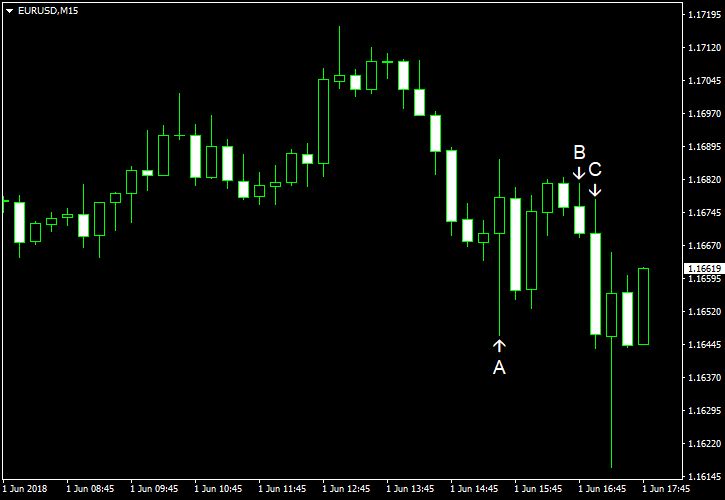