EUR/USD rallied today after European Central Bank chief economist Peter Praet said that the next week’s policy meeting will be a “judgment” call for the quantitative easing program. Some experts interpreted the words as a sign that the ECB will decide next week the date of a QE end sometime later this year. That allowed the currency pair to gain despite positive US economic data.

Nonfarm productivity rose 0.4% in Q1 2018. Analysts had expected the same 0.7% rate of growth as in the previous three months. (Event A on the chart.)

Trade deficit was at $46.2 billion in April down from $47.2 billion in March (positively revised from $49.0 billion). The average forecast promised a bigger deficit of $50.0 billion. (Event A on the chart.)

US crude oil inventories rose 2.1 million barrels last week, though remained in the lower half of the average range for this time of year. That was a surprise to analysts, who were expecting a drop by about the same amount. The stockpiles shrank by 3.6 million the week before. Total motor gasoline inventories rose by 4.6 million barrels and were in the upper half of the average range. (Event B on the chart.) 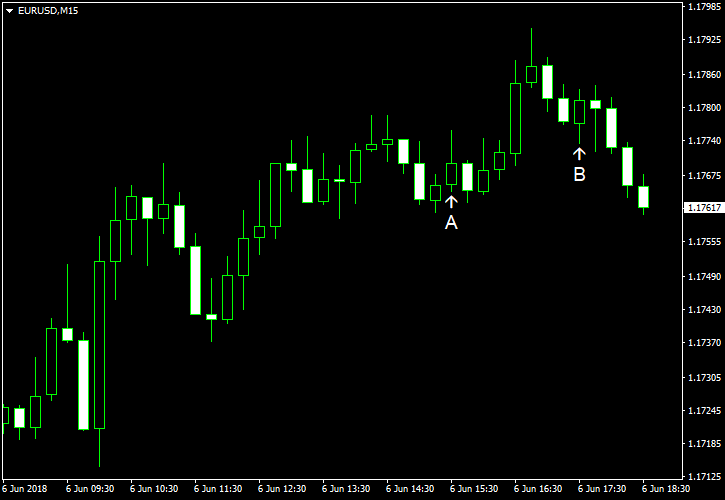