Find out what retail traders’ Equities buy and sell decisions say about the coming price trend!

Asian shares were down and in the red by Thursday afternoon trade as expected, echoing declines from the US session. There, the Fed raised rates for a second time this year and signaled two more that are on their way by year end. Signs of tightening credit conditions from the world’s largest economy also has knock on effects for lending conditions around the globe. This bodes ill for economic growth and thus, hurts stocks.

Japan’s Nikkei 225 was down almost by a half of a percentage point. In China, the Shanghai Composite declined about 0.28 percent. Australia’s ASX 200 did not quite suffer as much, falling about 0.14 percent.

Things were the dimmest in South Korea, where the KOSPI declined about 1.57 percent. Comments from US Secretary of State Mike Pompeo seemed to have further dampened sentiment in the area.

On the currency side of things, the Australian Dollar brushed off a rather disappointing local jobs report. The currency was quick to pare loses until a slew of worse-than-expected Chinese data crossed the wires, then it resumed its decline. In short, Chinese industrial production and retail sales clocked in at 6.8% and 8.5% y/y in May versus 7.0% and 9.6% estimated respectively. For full details, see the calendar below:

Since China is Australia’s largest trading partner, economic performance in the former can have knock-on effects on the latter. This can in turn impact the path for monetary policy from the Reserve Bank of Australia, thus affecting the Aussie Dollar. Amidst the decline in stocks, the anti-risk Japanese Yen appreciated against its major counterparts.

From here, all eyes turn to Thursday’s European Central Bank rate decision. Here, there is scope for Euro losses as anticipation for a definitive taper to QE opens the door for disappointment to the contrary. In addition, signs that stimulus may stay for longer or even be reduced at a slower pace could have some room to bolster stocks unlike the Fed.

On a daily chart, the ASX 200 is right on the lower line of a short-term ascending channel. While there may be a breakout lower ahead, resumption of its descent seen in most of May would require some confirmation via daily closes lower. From here, a push lower exposes the 38.2% Fibonacci retracement at 5,951. On the other hand, an ascent places the 14.6% minor level at 6,075 as the next target. 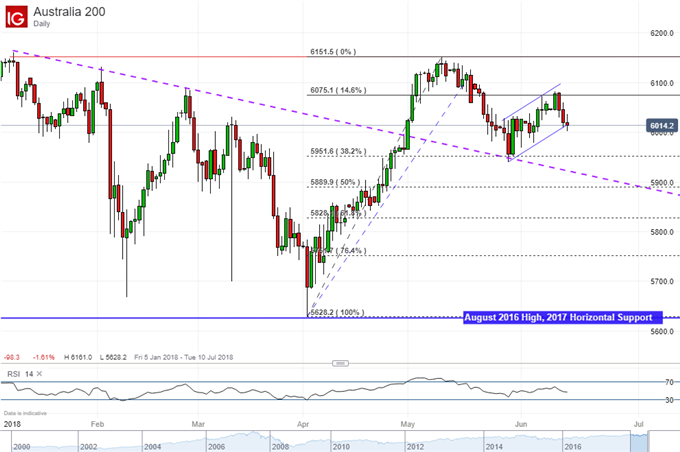