EUR/USD rebounded a bit following yesterday’s big slump, though the rally was not nearly enough to erase losses posted during yesterday’s session. The dollar was relatively weak today due to an intensifying trade war between the United States and China. The USA announced new tariffs on Chinese imports, and China promised to respond in a similar manner, imposing levies on US goods.
NY Empire State Index climbed from 20.1 to 25.0 in June instead of falling to 19.1 as analysts had predicted. (Event A on the chart.)
Industrial production and capacity utilization fell in May. Industrial production declined 0.1%. That is compared to the predicted increase by 0.2% and the previous month’s advance by 0.9% (revised, 0.7% before the revision). Capacity utilization edged down from 78.1% to 77.9% whereas experts had predicted no change. (Event B on the chart.)
Michigan Sentiment Index climbed from 98.0 in May to 99.3 in June according to the preliminary estimate, above the forecast value of 98.5. (Event C on the chart.)
Net foreign purchases were at $93.9 billion April. That is compared to the figure of $58.5 billion predicted by specialists and the previous month’s print of $61.8 billion. (Event D on the chart.) 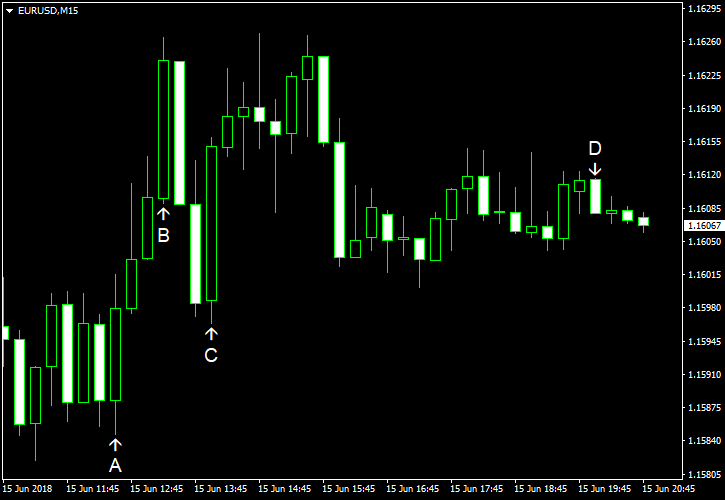