As anticipated, ASEAN bloc currencies like the Singapore Dollar, Malaysian Ringgit, Indonesian Rupiah and Philippine Peso depreciated against their US counterpart last week. Once the summit between US President Donald Trump and North Korean Leader Kim Jong-un passed without much volatility, FX markets turned to the Fed rate decision next. There, a hawkish tone pushed the greenback higher.

The week ahead is arguably toned down from the one prior, with key economic data notably absent from the world’s largest economy. In regards to more monetary policy updates, there will be speeches from policymakers as well as Fed Chair Jerome Powell at a panel in Sintra, Portugal. More reinforcements to last week’s hawkish outlook could send the US Dollar higher.

Locally speaking, we will get the Philippine Central Bank rate decision on Wednesday. Five out of eight economists polled by Bloomberg anticipate a hike to 3.50% from 3.25% which indicates a slight hawkish bias. Signs that fewer are coming down the road risks depreciating the Philippine Peso in a ‘dovish hike’. This perhaps could be the case given that reports citing Economic Planning Secretary Ernesto Pernia say that CPI may have peaked in May.

Speaking of inflation, on the same day as the BSP rate decision we will also get Malaysian price data. CPI is expected to clock in at 1.9% y/y in May which would be up from 1.4% back in April. However, such an outcome may not generate a lasting USD/MYR response. Bank of Negara Malaysia raised rates back in January and has a neutral stance on them. In the meantime, the focus is finding a replacement for BNM’s governor who recently resigned.

With that in mind, the focus for ASEAN bloc currencies in the week ahead will arguably be whether or not there will be escalating trade war fears. We got a small taste of that last week when the US imposed tariffs of $50 billion on certain Chinese goods. By the end of Friday, European and US shares finished the day lower while sentiment-linked currencies declined.

China followed with retaliatory measures over the weekend and the US is anticipated to respond with more levies ahead. In the event that trade tensions escalate between the two largest economies, risk trends will likely suffer. In addition, the US Dollar also tends to gain as a safe haven given its highly liquid status. Such a fundamental picture points to more losses for SGD, MYR, IDR and PHP against USD.

On a daily chart, USD/SGD has pushed above the 38.2% Fibonacci extension at 1.3490. This level closely aligned with the upper line of the horizontal channel that kept it at bay through most of May. From here, the pair faces the December 2017 highs around 1.3540 which could act as near-term resistance.

Keep a close eye on RSI as negative divergence shows ebbing upside momentum. While this does not mean that a reversal will happen, it should warrant caution on those taking hawkish bets. A close above 1.3540 could be confirmation that the pair is heading higher and may negate the warning. 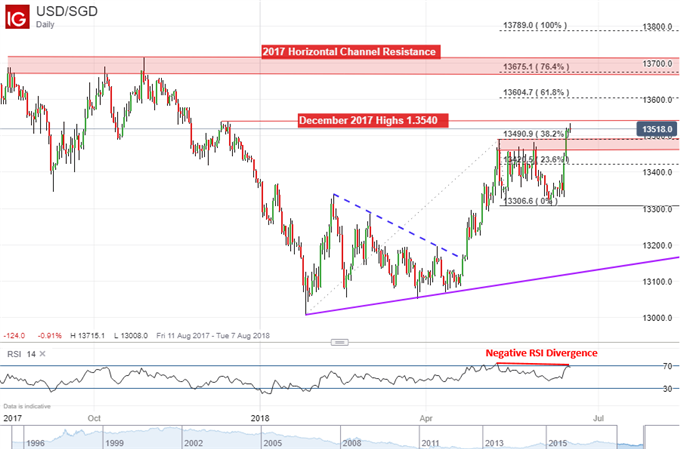