For forecasts, trade ideas, and educational guides, check out the DailyFX Trading Guides.

Last week, a big driver in markets was the trade war, but once again despite initial headlines hitting futures overnight, the down open was bought. This suggests that while traders are paying attention, it’s not yet viewed as ultra-significant. Expect this to continue to be a looming threat for the foreseeable future.

Turning attention to the economic calendar, next week holds several ‘high’ impact data releases: Consumer Confidence on Tuesday, Durable Goods and Trade Balance on Wednesday, GDP on Thursday, and Core PCE on Friday. For full details on release times and estimates check out the economic calendar.

As discussed in the morning commentary, the S&P could soon be in for a big test if it doesn’t hold support just below. A clean break of the May highs at 2742 will have the market potentially rolling downhill towards its fourth test this year of the February 2016 trend-line/200-day MA. Until support is broken, though, it could be just another pullback, but it’s looking increasingly likely that it may turn into something more sinister. 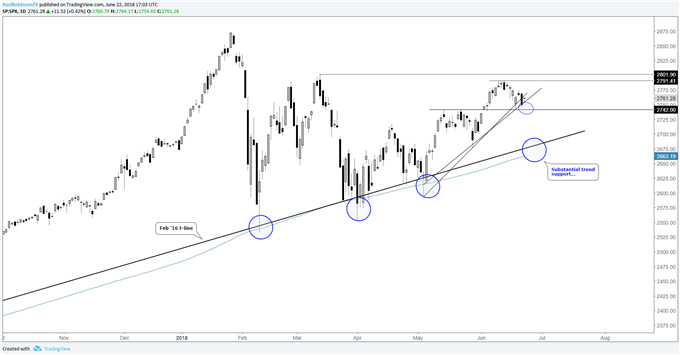 Looking ahead to next week, we have CPI figures for Germany on Thursday and on Friday for the Euro-zone. Friday also brings the June Germany Unemployment data. The inflation data is likely to be the bigger mover for the DAX given its stronger impact on the euro.

The decline this past week took the DAX below important support around the 12600/500-area, and was followed up by a bounce on Friday back into this zone. The broken zone of support is now viewed as a source of resistance and if the market can’t quickly and convincingly recapture it, look for the slide to continue. On further weakness, support first arrives at a swing-low from April at 12312.

On Thursday, the Bank of England voted 6-3 to keep rates on hold at 0.50%. The overall take-away was hawkish with rate hike expectations for August rising, which helped give sterling a boost following the announcement, and subsequently leading to a small sell-off in the FTSE. Next week, the only ‘high’ impact event on the calendar is Carney speaking Wednesday about the Financial Stability report. For a full run-down of all scheduled releases, check out the economic calendar.

Early last week, the FTSE first tested the bottom of a revived support zone from 7600 down to 7550 (7548 was the weekly low), not once but twice. This zone first arrived in the second-half of last year as staunch resistance, but it’s relevance had been unsupported since until this last week. Holding above last week’s low will be crucial if the market is to maintain a bid. A drop below and the developing bearish sequence off the May high could further itself along.