Looking at Brent and WTI Crude Oil after OPEC

IG analyst, Shaun Murison, takes a look at the Brent and WTI crude oil price charts in the wake of the decision by OPEC and some non-OPEC oil producers to raise output by 1 million barrels a day.

Oil markets have reacted to the news that the Organisation of the Petroleum Exporting Countries (OPEC) and non-OPEC nations will look to increase output by one million barrels per day (bpd). Initial gains in crude oil prices were perhaps a result of the announced increase falling below levels previously suggested by Saudi Arabia and Russia. Those countries had suggested an increase of 1.5 million bpd.

Comments from OPEC producers Iran and Iraq suggest that the output increase may fall short of the one million bpd target and may only realize a range of 500,000 to 770,000 bpd, as some countries would find difficulty in hitting the new quotas.

The US crude benchmark, WTI, rose more than 5% in the immediate aftermath of the increase announcement. The Brent crude benchmark managed to add 3.5% on the day. The gains were then paired.

Rather than looking at trading a purely one direction bias in the oil markets, the relationship between WTI and Brent might be deviating enough to offer a market neutral or pair trading opportunity.

The below chart looks to help identify this potential opportunity. 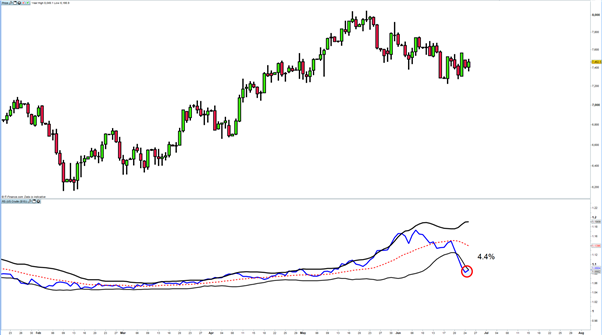 Brent Crude vs US Crude (WTI)

The chart is the Brent candlestick with a relative strength comparison (RSC) indicator added. The RSC (blue line) compares the price of one security with that of another in a ratio format. The RSC has experienced a decline in value recently, which highlights that security 1 (Brent) has been underperforming security 2 (WTI). Bollinger bands have been added to the RSC and highlight the underperformance of security 1 relative to the usual relationship of the two securities.

It is expected that the relationship between the two securities will revert back to normality favouring a possible pair trade opportunity i.e. long Brent and short WTI. The target from the technical persepective would be for the RSC to move back towards the 20 moving average (red line) which is regarded as the mean. This could occur with the price movements of the securities in a number of ways;

Should one of these scenarios play out successfully, the expectation would be for a net gain of 4.4%. A stop-loss would be considered equal to the anticipated gain of 4.4%