Despite the pullback in the US Dollar towards the end of last week, most ASEAN bloc currencies depreciated against it. The Indonesian Rupiah fell more than one percent after trading reopened following the Eid al-Fitr holiday, having a chance to react to previous greenback gains. One notable standout was the Philippine Peso which appreciated about 0.10% against USD last week.

PHP strength could be thanked for via the Philippine central bank which raised rates to 3.75% from 3.50%. As anticipated, Bangko Sentral ng Pilipinas lowered future interest rate expectations in 2018 and 2019 which could have lead to a weakening of interest rate hike bets and thus hurt the respective currency. However, commitment from the Governor to keep speculators at bay seemed to have worked and prevented PHP volatility.

Meanwhile the Bank of Indonesia stepped in and intervened in the foreign exchange market towards the end of last week. The central bank said that the Rupiah has overshot its fair value as it bought sovereign bonds worth 1.25 trillion Rupiah from the secondary market. Bank of Indonesia said that it will also continue on with conducting three forex swap auctions per week.

A Look Ahead – Domestic Events

The Bank of Indonesia’s actions crossed the wires ahead of this week’s monetary policy announcement. There, the markets are anticipating a hike as 9 out of 13 economists polled by Bloomberg envision an increase to 5.00% from 4.75%. Needless to say, an absence of follow through is likely to lead to IDR weakness. But back in June, the central bank hinted at more increases to come. Thus, markets will be looking at their forward guidance to gauge the likelihood of another rate hike in the near-term.

Aside from that, locally speaking we will get some important economic data out of Indonesia and Singapore. Both on Monday. First, we will get a trade balance report from the former nation. There, a deficit is expected in May at -$531m as imports outpace exports. For Indonesia, exports account for a relatively chunky portion of GDP so a deficit is not necessarily ideal for economic growth. But volatility around IDR on this release may be subdued given its close vicinity to this week’s rate decision.

As for Singapore, May’s inflation report will cross the wires shortly after the Indonesian trade data. There, CPI is anticipated to pick up to 1.4% y/y (the core reading) from 1.3%. An in-line response would be aligned with the MAS projections for inflation. As such, there might be a limited impact on Singapore Dollar price action as a result.

A Look Ahead – External Event Risk

Outside of the Asia/Pacific region, keep an eye out for the US economic calendar docket which is loaded with key event risk. From the world’s largest economy, we will get consumer confidence, GDP and the Fed’s preferred measure of inflation. Lately, data out of the country has been tending to outperform relative to consensus. Albeit, this has been by an increasingly smaller margin since the end of April. This suggests more relatively in-line outcomes which would keep the Fed on course for two more rate hikes this year.

Then, the wildcard for ASEAN bloc currencies remains the risk of increasing trade war tensions between the US and China. Lately, the EU has also been thrown into the picture as US President Donald Trump threatened the nation bloc with auto tariffs. As such, a decline in sentiment can have a twofold effect on risk-oriented assets like the higher-yielding and more illiquid PHP or IDR. First, a deterioration in risk appetite can result in a selloff as traders seek haven and unwind their bets. Second, a stronger USD as a result of its highly liquid status which could reignite its momentum.

Last week, we pointed out ebbing upside momentum in USD/SGD which warned that the pair could be turning lower. This setup has now been averted as negative RSI divergence lacked follow-through and the pair continued pushing higher. As such, this opens the door to more gains ahead.

From here, the pair will have to cross above 2017 horizontal channel resistance. This area also contains the 76.4% Fibonacci extension at 1.3675. A break above resistance may lead to the pair reversing its dominant downtrend dating back to December 2016.

On the other hand, USD/SGD may turn lower in the event that resistance holds up. From here, the December 2017 highs around 1.3540 could come back to act as former resistance new support. A descent under it exposes the range of highs seen back in May which start at 1.3490 (the 38.2% extensions). 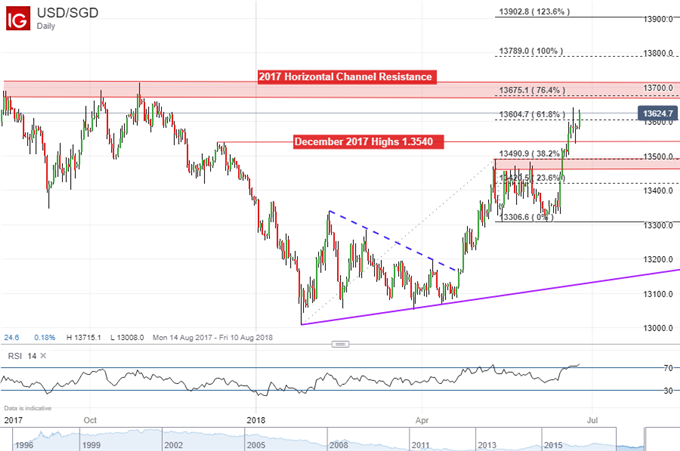