The US Dollar appreciated against its major counterparts towards the second half of Wednesday’s trading session. There, commentary from Donald Trump’s Economic Adviser Larry Kudlow sunk sentiment after risk trends recovered during the European session. Mr. Kudlow said that the US president is not softening his stance on China. This followed Mr. Trump deciding against harsher measures on Chinese investment.

Wall Street fell as the S&P 500 and Dow Jones declined about 0.9% and 0.7% respectively. Anti-risk currencies like the Japanese Yen appreciated. Gold, the anti-fiat unit, fell as the greenback strengthened as expected and appears to be heading for a close under a near-term descending support line. Crude oil prices rose as official EIA weekly inventory data showed stockpiles contracting more than anticipated, confirming earlier API estimates.

Sentiment-linked currencies like the Australian and New Zealand Dollars fell. The latter bottomed as the most recent RBNZ rate decision crossed the wires. There, the central bank left rates unchanged and left the door open for a rate cut as the next possible move. But that was not much of a surprise. Heading into the announcement, softer business confidence lowered RBNZ hawkish bets. A slight pullback in NZD/USD after the RBNZ could have been some of those bets unwinding given a status quo announcement. Local bond yields rose cautiously.

The Canadian Dollar depreciated towards the end of Wednesday’s session, unnerved by comments from BoC’s Governor Stephen Poloz. He said that trade risks are the biggest threat they face and that those tensions are affecting investment decisions. However, USD/CAD then pared some of its rise when Mr. Poloz said that the economy still warrants higher rates. He also said that business investment has been reasonably robust.

A Look Ahead – Asian Shares May Fall Sending Yen Higher

A lack of key economic event risk puts the focus on risk trends for driving markets during the Asian trading session. If local benchmark indexes echo declines from Wall Street on increased trade war fears, then the anti-risk Japanese Yen could once again benefit at the expense of its Australian and New Zealand counterparts. 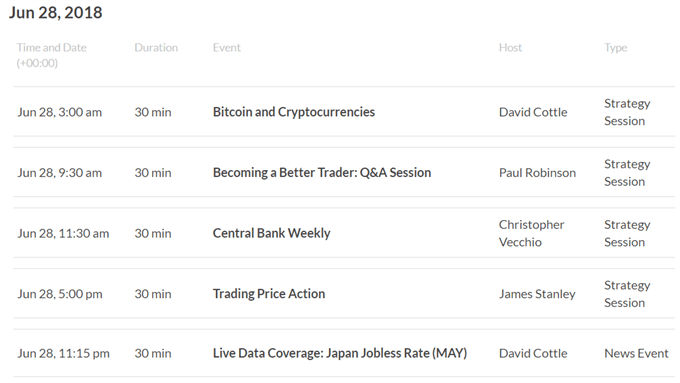 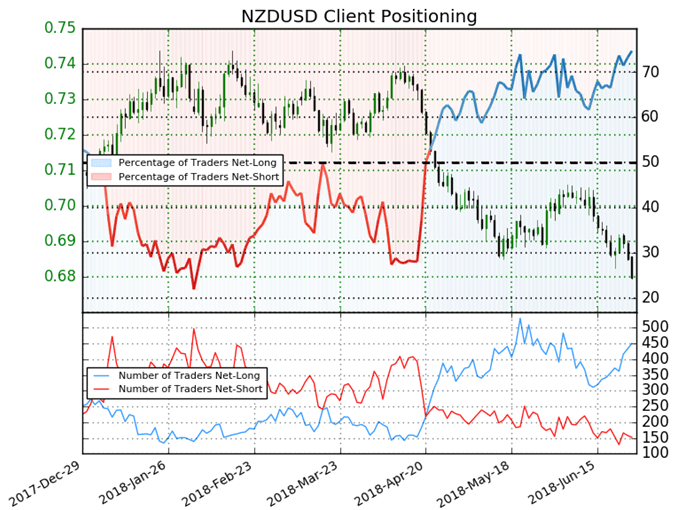 Retail trader data shows 74.8% of NZD/USD traders are net-long with the ratio of traders long to short at 2.96 to 1. In fact, traders have remained net-long since Apr 22 when NZD/USD traded near 0.73498; price has moved 7.5% lower since then. The number of traders net-long is 7.1% higher than yesterday and 30.8% higher from last week, while the number of traders net-short is 16.5% lower than yesterday and 19.1% lower from last week.