Stay up to date with important economic data with our Economic Calendar.

The US motorcycle manufacturer Harley Davidson has remained in the headlines as President Trump expressed interest to bring some foreign production to the United States with Harley remaining steadfast on their plans to move some production to Thailand. Harley’s commitment has continued to receive criticism and in conjunction, their share price has remained under pressure. For the year thus far, Harley Davidson, known by their ‘HOG’ ticker, has fallen a precipitous -15.61%. 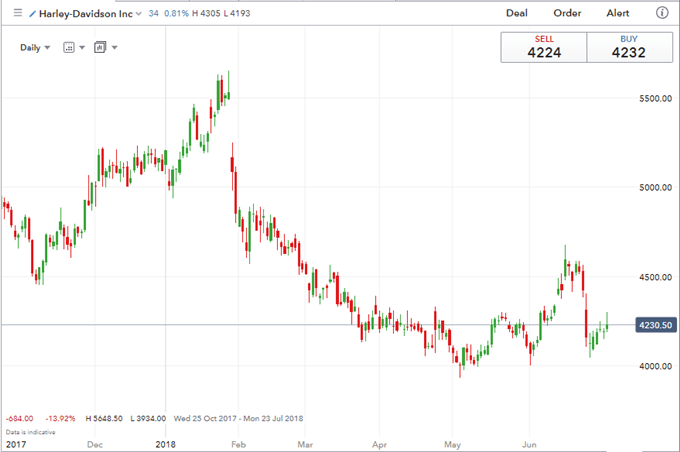 A Brief History of Trade Wars

On Twitter, President Trump invited foreign motorcycle manufacturers to move production to the US. As Harley looks to move abroad, their competitors may seize the opportunity to curry favor with the White House, or the invitation may go unheard. With most of Harley’s competition headquarted in Japan, Kawasaki, Honda, and Yamaha may fall in the crossfire of the particularly quiet front of the trade war between the US and Japan.

Gain insight on market moving events from our Live Webinars and learn to trade more effectively with our Free Trading Guides.

Although a close ally, Japan has been subject to US steel and aluminum tariffs since the beginning of May and has offered little response other than criticism, showing an unwillingness to enter tit-for-tat tariff exchanges. In recent weeks however, Japan has strongly opposed announced plans by the US to research auto tariffs. As a large exporter of vehicles to the US, auto tariffs may be the final straw for Japan’s mild response. The invitation to move production to the US could present Japan’s Prime Minister Shinzo Abe an opportunity to enter negotations with President Trump on trade and gain leverage in metal tariffs and proposed auto tariffs alike. Despite the opportunity, no concrete information or developments have been announced and the invitation may fall flat with all three Japanese motorcycle manufacturers already possessing some production capability in the United States.