EUR/USD Gets Boost from Underwhelming US Employment

EUR/USD rallied today, getting boost from worse-than-expected US employment data. Meanwhile, data in the eurozone was good.
ADP employment rose by just 177k in June, missing the analysts’ average estimate of 190k. On a positive note, the May increase got a positive revision from 178k to 189k. (Event A on the chart.)
Initial jobless claims rose unexpectedly from 228k to 231k last week, seasonally adjusted, instead of falling to 225k as analysts had predicted. (Event B on the chart.)
Markit services PMI slipped a bit from 56.8 in May to 56.5 in June according to the final estimate, which was the same as the preliminary reading and market expectations. Still, it was the second-highest figure since April 2015. (Event C on the chart.)
ISM services PMI, on the other hand, demonstrated an increase from 58.6% in May to 59.1% in June instead of a drop to 58.3% predicted by experts. (Event D on the chart.)
US crude oil inventories rose by 1.2 million barrels last week instead of falling by 4.4 million as analysts had predicted but remained below the five-year average for this time of year. Total motor gasoline inventories increased by 1.5 million barrels but stayed below the five-year average. (Event E on the chart.)
FOMC minutes showed that policy makers were concerned about the potential impact of trade wars:

Still, such concerns did not prevent the Committee from anticipating two more interest rate hikes this year. (Event F on the chart.)
On Tuesday, a report on factory orders was released, showing an increase of 0.4% in May, which followed the drop at the same rate in April. Economists had anticipated a smaller gain by 0.1%. (Not shown on the chart.) 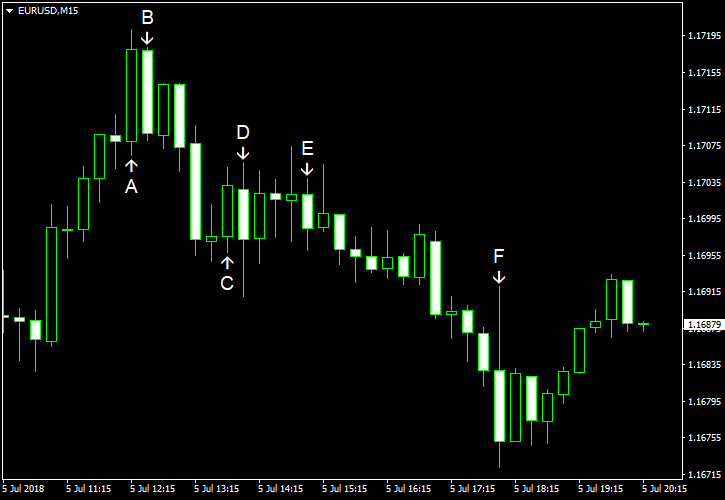