After managing to achieve some gains at the beginning of the week, the US Dollar underperformed by the end of it as a rather disappointing local jobs report crossed the wires. In the end, ASEAN bloc currencies like the Philippine Peso and Indonesian Rupiah were little changed against it. Though a notable standout was the Singapore Dollar. USD/SGD fell the most in a given week since early February.

A significantly better-than-expected Philippine inflation report failed to offer much of a boost to PHP. There, the headline rate clocked in at 5.2% y/y in June versus 4.8% estimated. This was also outside of the Philippine central bank’s highest case scenario for this data (5.1%). Governor Nestor Espenilla noted afterwards that they will have to review CPI estimates.

Meanwhile, foreign exchange reserves are slowly depleting across certain ASEAN nations. In the Philippines, those fell to their lowest amount since June 2012. Indonesian levels hit their smallest since February 2017. This is perhaps not too surprising given that last week, the Bank of Indonesia intervened again in the market to guard the Rupiah. A generally stronger USD is leaving its impact in emerging market economies.

One of the top tier event risks this week will be the Bank of Malaysia monetary policy announcement on Wednesday. The central bank is anticipated to leave its overnight policy rate unchanged at 3.25%. Markets will thus be tuning in for any adjustments in their forward guidance to gauge the likelihood of a rate move in the near-term. Keep in mind that the weaker Ringgit could be adding upward pressure to inflation and we shall see if the BNM addresses this.

Out of the Philippines, we will get May’s trade data on Tuesday. Exports are anticipated to contract by 4.3% y/y while imports surge 10%. This points to an overall anticipated trade deficit of $3577m. Though it won’t be too surprising to see a softer-than-expected export reduction. In addition to the Malaysian Ringgit, a weaker Philippine Peso can make local goods cheaper relatively speaking in the global market. This could bring in demand for products from this nation, thus potentially boosting GDP and central bank rate hike bets.

Then on Friday at midnight GMT, the first estimate of Singapore’s second quarter GDP will cross the wires. Growth there is expected to clock in at 4.1% y/y. This is a lower than first quarter’s 4.4% gain. The Monetary Authority of Singapore has taken on a more bullish stance for SGD back in April amidst upwards pressures on core inflation. Softer economic growth could undermine some of those bets, sinking the Singapore Dollar.

The loss in USD’s upside momentum is also leaving its mark on ASEAN bloc currencies as they may finally have some room to pare some of their recent aggressive declines. With that said, a dramatic deterioration in sentiment on trade war fears could still send the greenback higher if it turns into a flight for liquidity. Lately, the markets seem to be priced in for one as US benchmark indexes rallied even though US-China tariffs went into effect on July 6th.

On a daily chart, USD/SGD struggled achieving a daily close above 2017 horizontal channel resistance. Though prices were above it temporarily on July 3rd making for a new high this year at 1.3747. Since then, prices pushed below a near-term rising support line. But, more confirmation will be needed to argue technically that the pair could be heading lower.

This could be via a daily close below the December 2017 highs at 1.3540. From there, the next target could be the 38.2% Fibonacci extension at 1.3490 which is the upper resistance line of a small channel formed in May. On the other hand, a turn back to the upside places the 61.8% level as the immediate target at 1.3604. A climb above that exposes the lower line of the 2018 horizontal channel. 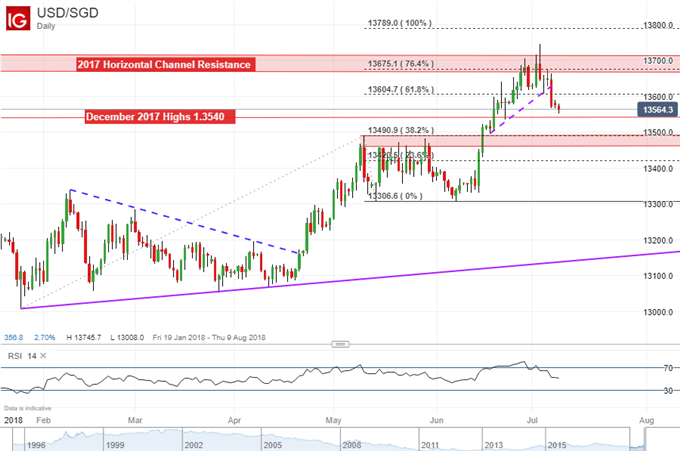