The EUR/USD currency pair has experienced some intraday volatility during the early European trading session, but mostly ignored the US fundamentals, which were rather good. The euro is trading just below its open level against the US dollar now.
US PPI increased by 0.3% in June on a seasonally adjusted basis, going faster than 0.2% gain predicted by markets, but well below the May’s pace of 0.5%. (Event A on the chart.)
Wholesale inventories rose 0.6% in May, a bit above the median forecast of 0.5% based on the same reading in the preliminary report. (Event B on the chart.)
Crude oil inventories declined by 12.6 million barrels last week — a much steeper decline than a 4.1 million barrels drop that had been expected by analysts. This compares to a growth by 1.2 million barrels reported the previous week. Total motor gasoline inventories declined by 0.7 million barrels but now stay above the 5-year average for this time of year. (Event C on the chart.)
On Monday, a report on consumer credit demonstrated an increase of $24.6 billion in May — more than twice bigger than the forecast value of $12.2 billion and April’s $10.3 billion (revised positively from $9.3 billion). (Not shown on the chart.) 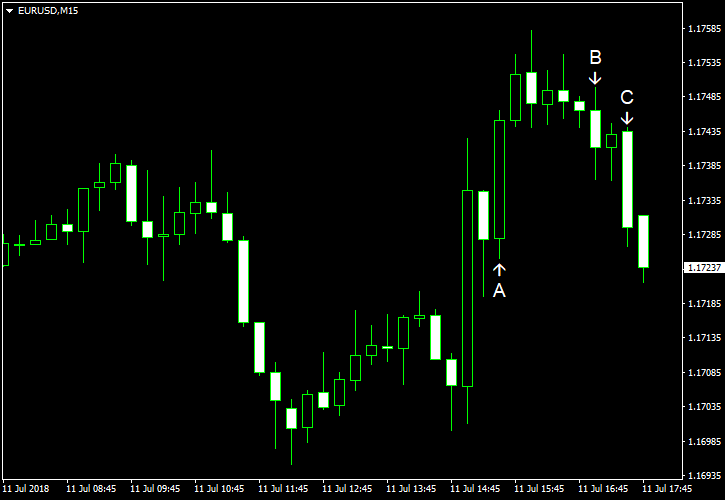