The US dollar had been winning against the single European currency during the late London and early New York trading sessions today before the poor US real estate statistics indicators made euro jump up. EUR/USD has not yet recovered all of its early losses but is doing quite well as of now.
Housing starts and building permits declined significantly in the United States in June. Housing starts went down to the seasonally adjusted annual rate of 1.17 million in June while only a slight drop to 1.32 million had been expected from the 1.34 million recorded in May. Building permits at the same time hit the rate of 1.27 million units, coming out worse than 1.33 million median forecast and the last month’s 1.30 million rate. Both indicators are at their lowest level since September last year. (Event A on the chart.)
Crude oil inventories unexpectedly rose by 5.8 million barrels last week after losing 12.6 million barrels a week earlier. Traders expected a decline by 3.4 million barrels. Total motor gasoline inventories lost 3.2 million barrels — a much steeper decline than 0.7 million of the previous period. (Event B on the chart.) 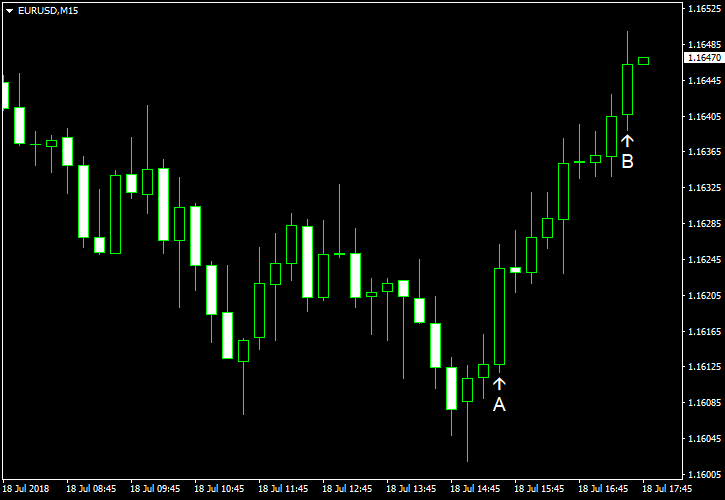