EUR/USD extended this week’s rally on Wednesday. While US politics played the major part in the rally, minutes of the latest policy meeting of the Federal Open Market Committee also contributed to the rally.
Existing home sales fell to the seasonally adjusted annual rate of 5.34 million in July from 5.38 million in June. Analysts were wrong with their promises of an increase to 5.40 million. (Event A on the chart.)
US crude oil inventories dropped by 5.8 million barrels last week and were at the five year average for this time of year. That is compared to the drop of 1.6 million barrels predicted by analysts. The stockpiles swelled by 6.8 million barrels the week before. Total motor gasoline inventories increased by 1.2 million barrels and were above the five year average. (Event B on the chart.)
FOMC minutes showed that US policy makers were concerned by the escalating threat of trade wars. In fact, they have gone as far as suggesting that such worries may disrupt FOMC plans for monetary tightening (event C on the chart):

Some participants suggested that, in the event of a major escalation in trade disputes, the complex nature of trade issues, including the entire range of their effects on output and inflation, presented a challenge in determining the appropriate monetary policy response. 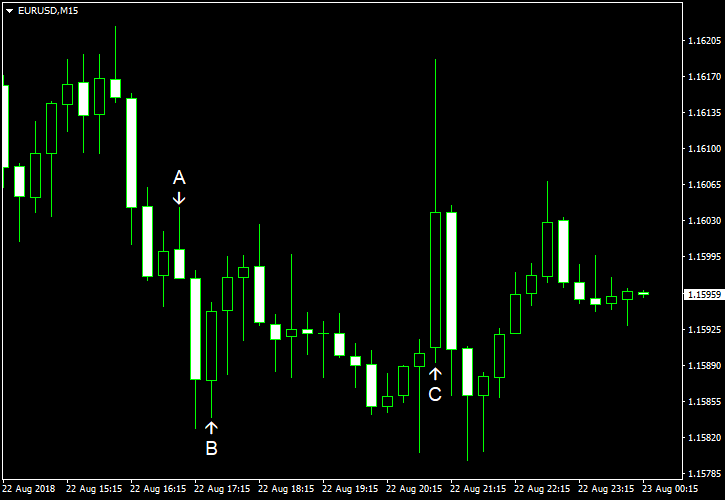