EUR/USD attempted to rally after the employment report from Automatic Data Processing failed to meet market expectations. Yet the currency pair was unable to sustain the rally and is trading near the opening level now. Markets were cautious ahead of tomorrow’s nonfarm payrolls and were watching developments in trade negotiations between the United States and its trading partners — China and Canada.
ADP employment rose by 163k in August. That is compared to 195k predicted by analysts and July revised reading of 217k. (Event A on the chart.)
Nonfarm productivity climbed 2.9% in Q2 2018, matching expectations, after rising 0.3% in the previous three months. (Event B on the chart.)
Initial jobless claims dropped from 213k to 203k last week, whereas specialists had expected them to stay basically unchanged. (Event B on the chart.)
Markit services PMI dropped to 54.8 in August from 56.0 in July according to the final estimate. Analysts had expected the index to be at the same 55.2 level as in the preliminary estimate. (Event C on the chart.)
ISM services PMI, on the other hand, climbed to 58.5% in August from 55.7% in July, above the forecast figure of 56.8%. (Event D on the chart.)
Factory orders dropped 0.8% in July after rising 0.6% in June. That is compared to forecast decrease by 0.5%. (Event D on the chart.)
US crude oil inventories shrank by 4.3 million barrels last week, almost two times the forecast drop by 2.2 million barrels, after falling by 2.6 million the week before. The stockpiles remained at the five-year average for this time of year. Total motor gasoline inventories increased by 1.8 million barrels and were above the five-year average. (Event E on the chart.)
Yesterday, a report on trade balance was released, showing an increase of the deficit from $45.7 billion in June to $50.1 billion in July, in line with expectations. (Not shown on the chart.) 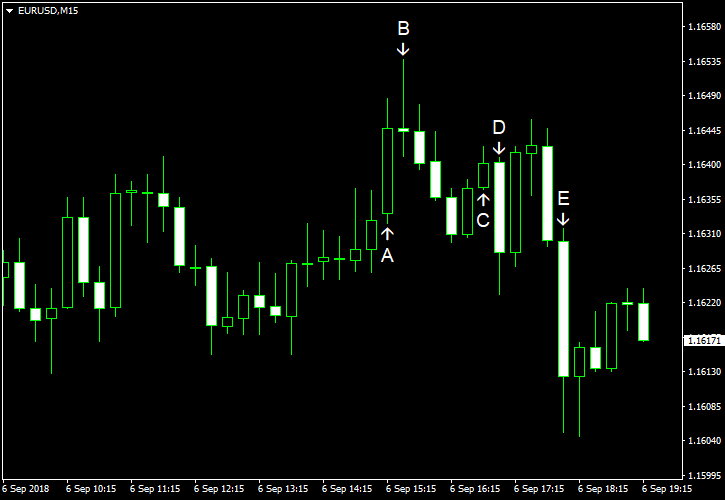