EUR/USD Retreats After US Macroeconomic Releases

EUR/USD attempted to rally today but reversed its upward movement at 8:00 GMT and accelerated decline after the release of macroeconomic reports from the United States. That was surprising considering that many of them, while not being outright negative, missed expectations. Some market analysts explained the decline by cooling hopes for US-China trade talks.
Retail sales rose just 0.1% in August, missing the analysts’ average estimate of a 0.4% increase. The July increase got a positive revision from 0.5% to 0.7%. (Event A on the chart.)
Both import and export prices fell in August. Import prices dropped 0.6%, exceeding the 0.2% decline predicted by analysts and the 0.1% drop registered in July. Export prices inched down 0.1% following the 0.5% decrease in the previous month. (Event A on the chart.)
Industrial production and capacity utilization, on the other hand, increased in August. Industrial production rose 0.4%, the same as the positively revised July reading (which showed an increase by just 0.1% before the revision), exceeding the median forecast of a 0.3% increase. Capacity utilization rate edged up from the negatively revised July figure of 77.9% (78.1% before the revision) to 78.1%, though still missed market expectations of 78.3%. (Event B on the chart.)
Michigan Sentiment Index rose from 96.2 in August to 100.8 in September according to the preliminary estimate. The actual figure was far above the average forecast of 96.7. (Event C on the chart.)
Business inventories rose 0.6% in July. It was a bigger increase than 0.5% predicted by analysts and 0.1% logged in June. (Event C on the chart.) 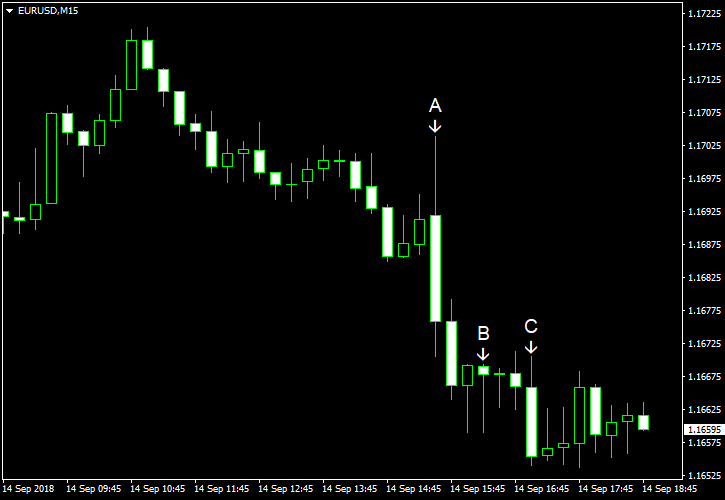