EUR/USD Attempts to Hold onto Gains as US Yields Surge

EUR/USD attempted to rally today but retreated as yields for 10-year US treasuries surged, breaking the 3% level this week, and today’s macroeconomic data released from the United States was mostly good. The currency pair was still hanging above the opening level.
Housing starts were at the seasonally adjusted annual rate of 1.28 million in August, up from 1.17 million in July. Analysts had predicted a smaller increase to 1.24 million. Building permits were at the seasonally adjusted annual rate of 1.23 million in August, down from the July revised estimate of 1.30 million. Experts had predicted a small increase to 1.31 million. (Event A on the chart.)
Current account deficit shrank to $101.5 billion in Q2 2018 from $121.7 billion in Q1. That is compared to the average forecast of $104 billion. (Event A on the chart.)
US crude oil inventories decreased by 2.1 million barrels last week and were below the five-year average for this time of year. The actual decrease was smaller than 2.7 million barrels predicted by experts and 5.3 million barrels logged in the previous week. Total motor gasoline inventories decreased by 1.7 million barrels and were above the five-year average. (Event B on the chart.) 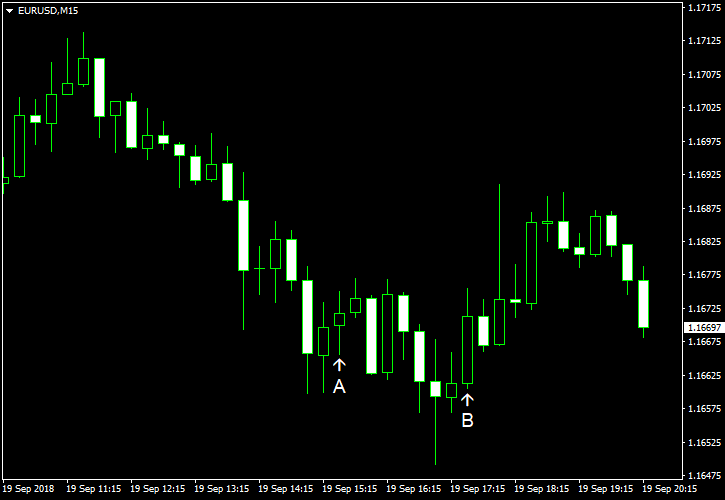