EUR/USD Volatile After FOMC Rate Hike, Decides to Go Down

EUR/USD was very volatile after the Federal Open Market Committee hiked interest rates and suggested there will be one more rate hike this year. Initially, traders were unsure how to interpret the statement’s wording, resulting in big swings of the currency pair. Ultimately, it decided to go down.
New home sales were at the seasonally adjusted level of 629k in August, matching forecasts. The July figure got a negative revision from 627k to 608k. (Event A on the chart.)
US crude oil inventories increased by 1.9 million barrels last week, though remained below the five-year average for this time of year. That is instead of falling by 0.7 million barrels as experts had predicted. The stockpiles declined by 2.1 million barrels the week before. Total motor gasoline inventories increased by 1.5 million barrels and remained above the five-year average. (Event B on the chart.)
FOMC decided to increase the target range for the federal funds rate by 25 basis points to 2%-2.25%. Market participants noted the absence the “accommodative” language describing monetary policy in the statement, though initially they were unable to decide whether it is a hawkish sign or dovish. Chairman Jerome Powell explained at the press conference that the change of wording just means that monetary policy proceeds within expectations. The updated economic projections showed faster economic growth this year and the next compared to the previous forecast. The projected appropriate policy path for the federal funds rate remained without change, meaning that the FOMC expects one more hike this year. (Event C on the chart.) 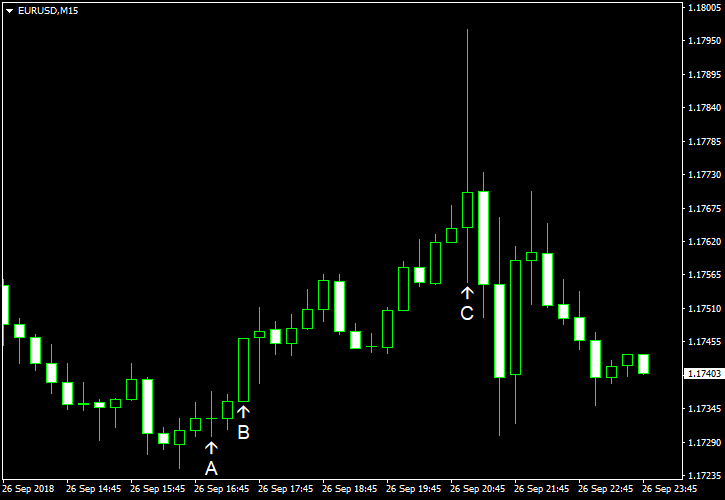