EUR/USD Gives Up Gains Caused by New About Italian Budget

EUR/USD surged initially today on the reports that Italy is planning to reduce its budget deficit after 2019 in an attempt to find a compromise with the European Union, which was criticizing Italy’s initial plan to run the budget with a 2.4% deficit for three years. Yet the risk appetite caused by the news has faded by now, and the currency pair retreated below the opening level. The pair continued to move lower after the report from Automatic Data Processing showed unexpectedly big growth of US employment.
ADP employment surged by 230k in September from August. That was a far bigger increase than predicted by experts (185k) and registered in August (168k, revised). (Event A on the chart.)
Markit services PMI fell to 53.5 in September from 54.8 in August according to the final estimate. Analysts had expected the same 52.9 reading as in the preliminary estimate. (Event B on the chart.)
ISM service PMI, on the other hand, rose to 61.6 in September from 58.5 in August. Experts had expected a drop to 58.0. (Event C on the chart.)
US crude oil inventories swelled by 8.0 million barrels last week and were at the five-year average for this time of year. The increase was huge compared to the median forecast of 1.1 million barrels and the previous week’s gain by 1.9 million barrels. At the same time, total motor gasoline inventories fell to 0.5 million barrels, though remained above the five-year average. (Event D on the chart.) 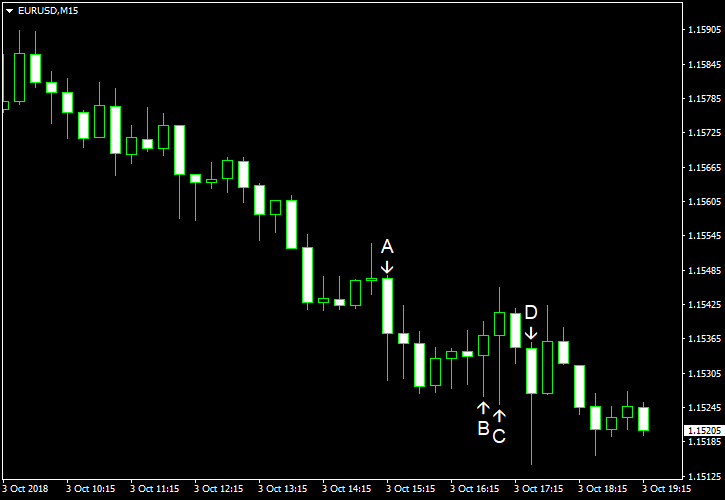