EUR/USD rallied on Tuesday but was heading to end the session flat. While the currency pair got boost from the dollar’s weakness caused by the positive market sentiment, it looks like optimism slowly eroded. US macroeconomic releases added to the downside momentum as basically all US indicators were better than expected.
Industrial production rose 0.3% in September. That is compared to the median forecast of a 0.2% increase and the 0.4% growth in August. Capacity utilization remained unchanged at 78.1%, in line with expectations. (Event A on the chart.)
Net foreign purchases were at $131.8 billion in August, more than two times the forecast value of $50.3 billion. The previous month’s figure got a negative revision from $74.8 billion to $66.7 billion. (Event B on the chart.)
Yesterday, a report on treasury budget was released, showing a surplus of $119.1 billion in September that followed the deficit of $214.1 billion in August. Analysts had predicted a smaller surplus of $71.0 billion. (Not shown on the chart.) 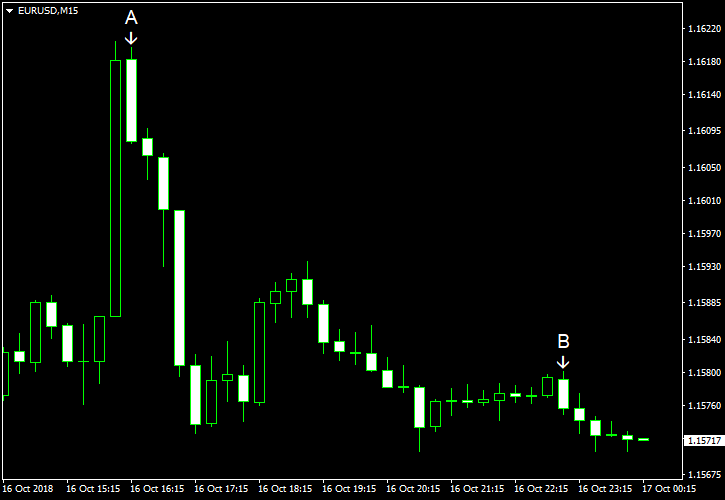