EUR/USD dropped as PMI prints released in the eurozone today were disappointing, while US PMIs were better than expected. Traders wait for tomorrow’s policy meeting of the European Central Bank but do not expect any changes to monetary policy, especially after the poor macroeconomic data.
Both Markit manufacturing PMI and Markit services PMI rose in October according to the flash reading. Manufacturing PMI edged up a bit to 55.9 from 55.6 in September. Services PMI advanced to 54.7 from 53.5. The analysts’ average forecast had predicted a reading of 55.4 for the manufacturing index and 54.1 for the services index. (Event A on the chart.)
New home sales were at the seasonally adjusted annual rate of 553k in September, down from the downwardly revised August rate of 585k. Forecasters had promised an increase to 627k. (Event B on the chart.)
Crude oil inventories rose by 6.3 million barrels last week and were above the five-year average for this time of year. That is compared to the predicted increase by 3.6 million barrels and the previous week’s gain by 6.5 million barrels. Total motor gasoline inventories decreased by 4.8 million barrels but also remained above the five-year average. (Event Ð¡ on the chart.) 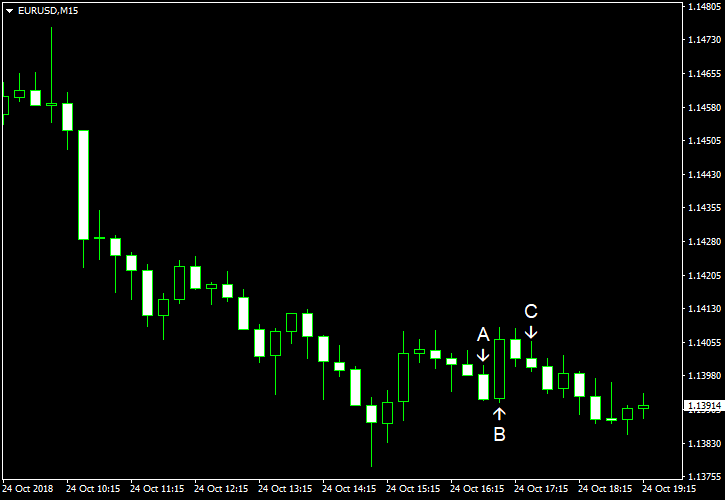