EUR/USD rallied on the positive market sentiment caused by the optimistic outlook for the Sino-US trade talks. Currently though, the currency pair has trimmed its gains. While the EUR/USD pair attempted to gain on poor US macroeconomic releases, the attempts failed and the pair continued to move lower, though remained above the opening level.
ADP employment rose by just 129k in March, missing the consensus forecast of 184k. It was the smallest increase 18 months. The February increase got a positive revision from 183k to 197k. (Event A on the chart.)
Markit services PMI was at 55.3 in March according to the final estimate, down slightly from 56.0 in February. Market participants were expecting the same 54.8 figure as in the preliminary estimate. (Event B on the chart.)
ISM services PMI dropped to 56.1% in March from 59.7% in February, below the average forecast level of 58.1%. (Event C on the chart.)
US crude oil inventories swelled by 7.2 million barrels last week, surprising experts, who were expecting a decrease by 0.7 million barrels. The jump followed the previous week’s gain by 2.8 million barrels. The stockpiles were above the five-year average for this time of year. Total motor gasoline inventories dropped by 1.8 million barrels but were also above the five-year average. (Event C on the chart.)
Yesterday, a report on durable goods orders was released, showing a drop of 1.6% in February. That is compared to a decrease of 1.1% predicted by analysts and the increase of 0.3% registered in January. (Event D on the chart.) 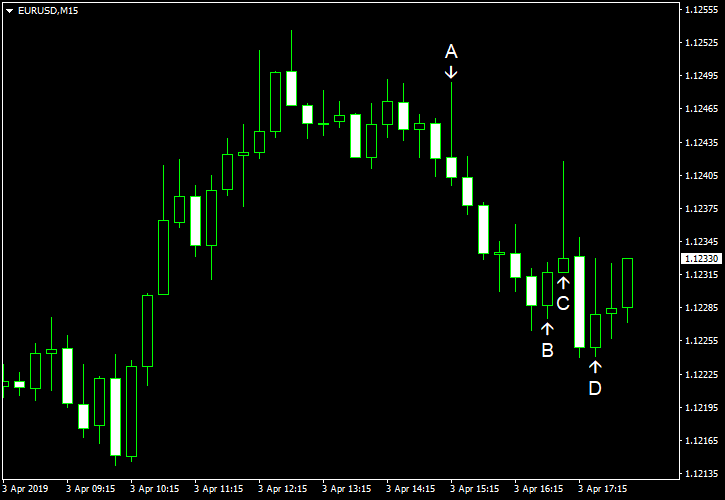